Demonstrators have gathered at prominent New Plymouth landmark Moungaroa, or Blagdon Hill, to protest its sale by telecommunications company Chorus. 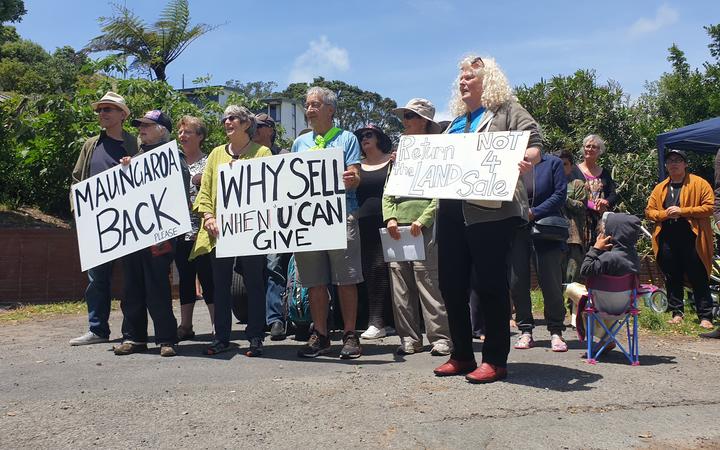 Protesters say the ancient pā site was forcibly acquired from its Māori owner in the 1930s and this afternoon demanded that it be returned to their descendants.

It was subsequently used for telecommunications and Chorus took over ownership of half the hill when Telecom split in 2011.

Chorus put the 1.8ha site on the market since 2017 after deeming it surplus to its requirements.

The company this week announced it had an unconditional buyer.

A descendant of Te Kaho, Tihikura Hohaia, said the land would not have been sold willingly.

"Certainly the narrative that we know is that our people were holding onto land as best they could despite the myriad of local bylaws that were created to pry land from us and the Public Works Act was a blunt tool used indiscriminately against our people."

Mr Hohaia said he wanted to see public access to the land but feared the worst.

"I'm assuming [it's been sold] to a wealthy land owner who can build a flash house for themselves up there or perhaps more so you know the injustice is glaring and I'm just glad that we've got some support some solidarity from Pākehā."

Another descendant Pikikore Moore also took comfort from the Pākehā support for their kaupapa.

"My hope is that it represents the continued awakening of people who sit silently and they must get this twinge of 'gee that's not right what's going on'.

"We've just had national celebrations about our history or versions of it. This is part of that history. Nothing's changed."

Sue Comrie who put out the call for a protest described Moungaroa as Chorus's Ihumātao moment. 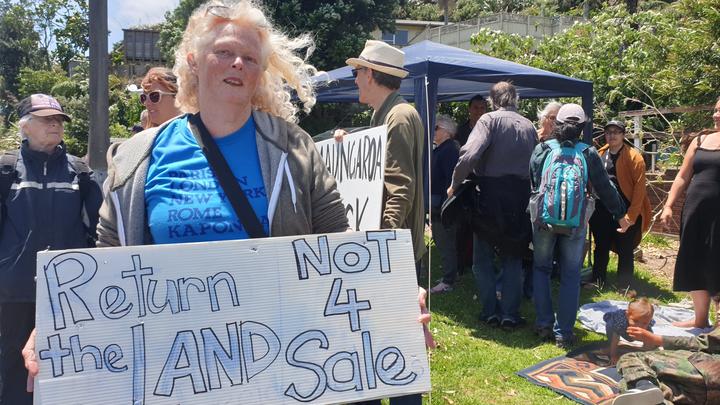 "This land has been taken scurrilously in my opinion and under stealth. There was a reservoir supposed to be put up, it's not there. Eighty years later there's not rent paid, there's no apology, there's no land restored to the family.

"Well, why not? Why haven't we got systems in place to address these old mistakes that we've made in the past."

New Plymouth District Council owns the other half of Moungaroa, which is a reserve.

Mayor Neil Holdom said it asked Chorus to gift its land to the community.

"Chorus flat out refused to consider donating it to the community. They asked if the council would purchase the land but it doesn't fit with our strategic objectives.

"So it doesn't surprise us that they've taken this approach and it just reflects that investments in the communities that they trade in isn't a big priority for them."

"The other option is that the council buy it back. They've got the money. Council were the ones that took the land. From my perspective the ball lies in the council's court."

In a statement, Chorus said its core business was to provide infrastructure that delivered better broadband to communities.

"Part of our responsibility is to make sure we invest in the right things so we have been looking at our property portfolio nationwide to see if we still need all the land we own, or if the funds tied up in that could be put to better use around the country," the company said.

"We have rural communities, including in New Plymouth, that are constantly asking us to upgrade our infrastructure so they can get the better broadband. To do this we need funds and so we have been looking at properties like the Blagdon Hill site which is surplus to requirements."

Chorus would not say who had bought the Moungaroa or for how much.