The bus company at the centre of Auckland's industrial disputes has brought in 28 drivers from the Philippines so far this year. 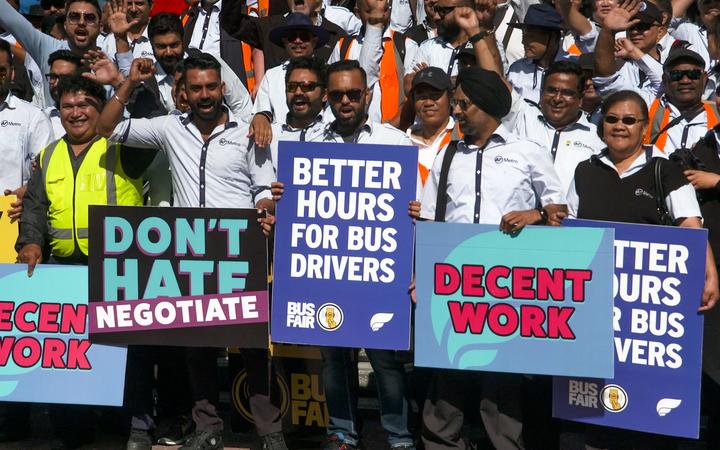 Hundreds of bus drivers marched on Queen St during negotiations between the union and NZ Bus. Photo: RNZ / Dan Cook

Its general manager for visa and border operations, Nicola Hogg, said the workers were given Essential Skills Work Visas.

"Officers need to be satisfied that there are no suitable New Zealanders available to take up a job, which has been offered to a foreign national who does not already hold a visa which enables them to work," she said.

Last week hundreds of NZ Bus drivers got back behind the wheel after taking strike action, and they are still negotiating for better conditions.

First Union's transport secretary Jared Abbott said bringing in drivers from overseas is not the answer.

"We have a really bad habit in this country of allowing migrant workers to fill spots where terms and conditions don't allow the market to fill jobs," he said.

"Why is the government allowing them to bring in workers when the curent workforce aren't willing to work for those rates? The obvious answer here is to fix up those terms and conditions so that migrant workers aren't required."

Mr Abbott said his concern for any workers brought into the country to work in a low-paid job is that they may be exploited.

"They're very dependent on the company that brings them in and this is one of he reasons why a lot of poor employing companies prefer to use migrant workers because they can leverage off their visa status to keep them under control and that's our concern."

There are three more visa applications for bus drivers supported by NZ Bus currently being assessed.

NZ Bus also brought in four drivers from Tonga, Fiji and Indonesia this year to work in Auckland.

The company did not reply to RNZ's requests for an interview.