The death of Sir Peter Snell has prompted an outpouring of tributes and farewells to a titan of New Zealand sports history. 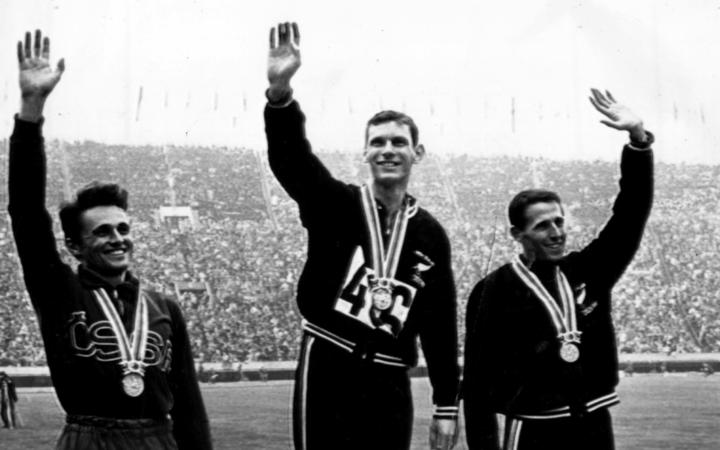 Sir Peter, who has been praised as perhaps New Zealand's greatest ever athlete, won gold in the 800m in the Rome Olympics in 1960, setting a new international record, and the 800m and 1500m in the following Tokyo Olympics in 1964.

He died in his sleep at his home in Dallas on Thursday, local time, just a few days before his 81st birthday.

Barry Magee was with him in the stable of legendary coach, Arthur Lydiard, and said they last met in 2017 when Sir Peter gave two of his three Olympic gold medals and memorabilia to the care of Te Papa.

Magee said Sir Peter was the greatest athlete who has every competed for New Zealand.

"Part of me wants to cry. The other part celebrates the life of this great, great, great New Zealander.

"There wouldn't be another sportsman in New Zealand that would not envy the record that Sir Peter Snell has created and what he has done."

He said Sir Peter was to athletics what Sir Edmund Hillary was to mountaineering.

In a statement, New Zealand Olympic Committee President Mike Stanley said Sir Peter was responsible for some of the finest moments in New Zealand sport.

The New Zealand Olympics Team posted a tribute to the man, saying words could not describe the impact he had on the country's sporting legacy.

The team tweeted that Sir Peter was "a champion, a leader and a great New Zealander and our thoughts are with his friends and family".

It is with great sadness that we acknowledge the passing of Olympian #151, the great Sir Peter Snell.

He was a champion, a leader and a great New Zealander and our thoughts are with his friends and family.

Other fellow Olympians and athletes offered their own farewells to a legend.

New Zealand sport has lost one of its greatest sons.

Rest In Peace Sir Peter Snell. Your feats on the track will continue to inspire for generations. pic.twitter.com/XMpPHyfPkR

Today the running world lost an absolute legend of the sport. Rest easy Sir Peter Snell. You will be missed. pic.twitter.com/zWAPjF0vNw

When he turned 19, Peter Snell (bib 96) decided to give up tennis and the rugby to focus on his running. When we commit wholly to this sport, things change. He got faster, much faster. He won… more and more frequently. Then, a stress fracture in his tibia put him on crutches for 3 months. This couldn’t have come at a worse time, as New Zealand was using the results of the upcoming season to pick the Olympic Team... Snell waited. 2 months of total inactivity. Several doctors opinions, then, gradually, he returned to running. ⁠⠀ .⁠⠀ .⁠⠀ He came back. For a month wore the thickest shoes he could find and ran only on grass surfaces. The speed returned. 18 months later, he stood on the top step in Rome and had an Olympic Gold Medal hung around his neck.⁠⠀ .⁠⠀ .⁠⠀ If you get hurt, listen to your doctors, take the time off, heal, you’ll be back in no time, and those obstacles don’t stand a chance. ⁠⠀ .⁠⠀ .⁠⠀ .⁠⠀ #olympichistory #runninghistory #historicrunners #historicrunning #newzealand #petersnell #allblacks #newzealandrunners #nohumanislimited #eliudkipchoge #marathon #runnerfortheworld #runnersworld #runningmotivation #runninghistory #runninggal #runninglife #runhappy #instarunners #run #runningismylife #runforever #plantarfasciitis #training #runnersofinstagram #larinascente #runner #stayyoung #asics #keeprunning

In 2000 he was voted New Zealand Athlete of the Century and he became a Distinguished Companion of the Order of New Zealand in 2002.

Many people had fond memories of Sir Peter, both on the track and off it.

RIP Peter Snell .lucky to meet you twice and both times a joy .You judged me best looking baby at the Taihape AMP show and then got to talk to you about that 20 years later when you lectured us at Otago University about sports medicine .Inspirational. Condolences to the family

I broke the sad news about Peter Snell to our resident Olympic expert, who sat down with a heavy sigh.
"Unquestionably our country's greatest ever Olympian."
A mighty tōtara has fallen.

Olympic middle distance runner Sir Peter Snell dies, age 80, just days short of his 81st birthday. #RIP
We grew up learning about this legend... but even legends eventually pass away. He has left such 1a contribution to NZ history and in his working life.https://t.co/DFS3Ulrbez

Politicians shared their thoughts, with Sport and Recreation Minister Grant Robertson saying he was "one of our true sporting heroes".

"Sir Peter is recognised as New Zealand's greatest ever athlete. He was world class, driven, determined and humble," Mr Robertson said in a statement.

"Sir Peter's achievements weren't just on the track. He always had a desire to give back to his sport and his country. He remained a proud New Zealander, and is loved and admired by generations of New Zealanders."

Prime Minister Jacinda Ardern said Sir Peter was "a legend, here and around the world".

"Our thoughts are with Sir Peter's wife Miki and their family."

I remember going home from my rugby awards night and hearing Sir Peter Snell had won the Olympic gold. As a country, we were so proud of what he had achieved! He'll always be a NZ hero. https://t.co/cz5AHhmong

Sir Peter Snell was born in the small South Taranaki town of Opunake. A great NZer who led the way and made his mark in the world. My respect and appreciation to him and his family at their loss. https://t.co/XY1ozs9dW7

Peter Snell was a hero for my generation. Listened to both the Tokyo golds on the transistor radio with 10 year old mates. Rothman’s coach visited our club. Then several meetings in NZ and Dallas. Thorough gentleperson.

Perhaps our greatest athlete ever. Driven, determined, humble and always with a desire to give back. A true hero. Rest easy now. https://t.co/hIXBz7CBwZ

And tributes flew from journalists.

Grew up being schooled by elders about the middle distance Kiwi legend that was Peter Snell. His extraordinary 800-1500 double at the ''64 Toyko Olympics deserves recognition when the Games return there this summer. He died today, aged 80. RIP

Peter Snell - one of New Zealand's all-time great sporting athletes; honoured permanently in two towns in NZ. (Wanganui & Opunake) They ensure he will never be forgotten. But the whole country mourns. pic.twitter.com/Sqb5FlYta7

Peter Snell's exploits were a few years before I was born but he was still an inspirational figure to read about as I grew up. Three Olympic titles. World records galore. No wonder the Lydiard system he trained under captured the imagination of the world. https://t.co/BlnGDY3j4t