By Lee Scanlon for Westport News

Gold is gleaming again in the West Coast town of Reefton, four years after Oceana Gold closed its Globe Progress mine there. 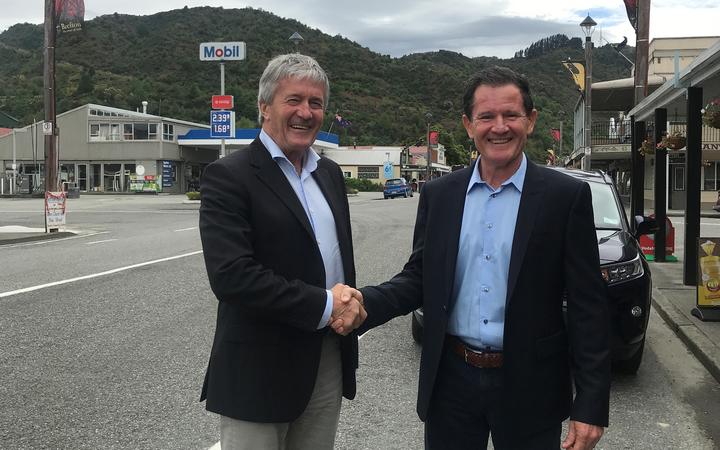 "This is great news for the Coast that could attract hundreds of millions of dollars in investment into the region," Mr O'Connor said.

The $15m loan would allow Tasman Mining to build 3.3km-long twin decline tunnels at the former Blackwater gold mine site and complete a three-year drilling programme to see if gold mining would be viable there again, Mr O'Connor said.

"Private funding is difficult to raise for gold mining and PGF funding will accelerate the project for the community, as well as lift the confidence of private investors to back the project," he said.

Parliamentary Undersecretary for Regional Economic Development, Fletcher Tabuteau, said the project built on a pre-existing mine operation with known gold reserves, and the skills and experiences of local people and businesses.

Mr Tabuteau said a 20-year mining permit was in place. The mine entrance was on private land, which would be rehabilitated for forestation and grazing once mining finished.

The Blackwater mine is owned by Oceana Gold. Sydney-based Tasman Mining has an exclusive right to buy the mine once it decides to develop it.

Tasman Mining managing director Mark Le Messurier said the loan would give potential investors confidence in the project, making it easier to raise the next $35m funding for drilling and building tunnels - expected to take three years.

Blackwater would then decide whether to buy the mine from Oceana Gold.

"There's an agreed price and I'm assuming, of course, that we will buy it."

Tasman expected to begin ramping up work on site in about six months, he said.

"You can safely say we'll need 40 people from about the middle of next year…We believe the majority of the workforce will be employed locally."

Tasman also hoped to attract home some Coasters working in mines in Australia.

Tasman planned to list on the sharemarket, Le Messurier said. The company would require $500m over a decade to buy the mine, equip and operate it and build a $50m processing plant.

"We will be spending approximately $50m a year at the operation, but we'll be generating in excess of 60,000 ounces of gold."

Oceana Gold last year provided Tasman with seed funding of $7.6m. Le Messurier said Tasman had spent about half of it.

The balance would be used to construct buildings such as workshops and offices, provide services, and excavate the tunnel entrance.

Le Messurier said the Blackwater ore body was 700m below the surface - too deep for opencast mining.

"We have to use underground methods, but the other reason, of course, is we do not disturb Department of Conservation land."

The mine entrance would be on private land. Tasman had all the consents and permits it required, he said.

The mine had an estimated life of 10 years, although he hoped it would go longer.

Le Messurier said the ore would be processed on site, poured into 16kg gold bars, transported in security vans to Christchurch, then flown to a gold refinery in Australia.

Refining would increase the purity from 85-90 percent to 99 percent.

Le Messurier, who lives in Sydney, said he had no plans to move to Reefton. "From a practical point of view and running a corporate office and tapping into financial markets, Sydney is the place to for me to be at the moment."

Nigel Slonker, formerly of Westport, would manage the mine. He was also involved in the Blackwater feasibility study completed by OceanaGold in 2014.

Le Messurier said Tasman Mining began sounding out the PGF about May and submitted its application in July. He declined to reveal the terms of loan.

Le Messurier said he had been a mining engineer for 30 years and had run gold mines for the last 20 years.

Blackwater mine is 37km from Reefton, beneath the abandoned township of Waiuta. The deposit was continuously mined successfully from 1908 to 1951, producing about 700,000 ounces.

Over $18m has already been spent on exploration there.

This story was originally published in the Westport News