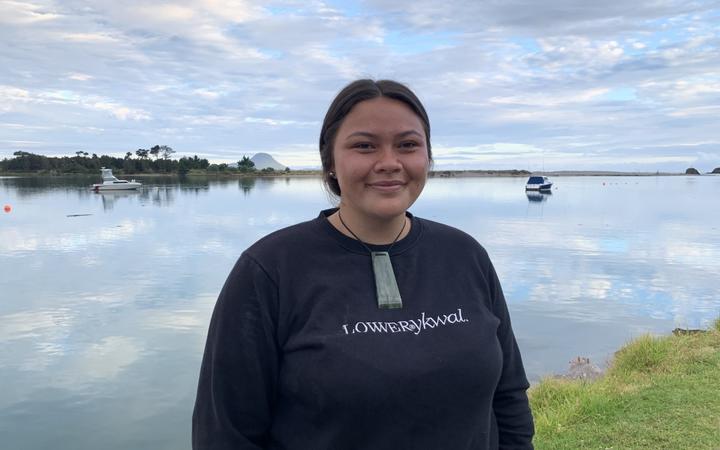 Poppy Rika was at the Whakatāne boat ramp this morning for karakia. She was one of about 50 whānau, friends and locals gathered from about 4.30am.

She said she came down to support whānau impacted by what's happened.

"To just show we love them, to show all our love to everybody, it's a pretty sad time. We thought it's the right thing to do to come down early this morning, no matter how early it was, to come down and tautoko with all of our family."

She was offered the job Tipene Maangi, who is one of eight people missing on Whakaari, accepted. But she turned it down as it wasn't right for her, she said.

"Ever since the tragedy on Monday, my heart has been heavy, I've been so sad... I couldn't even sleep, my family is like, that could've been you, and I was like, yeah, it could've been."

Her father has told her if she was out there, he would've come straight to the volcano to rescue her.

"That clearly shows how the family of the loved ones will be feeling, so it's really important that operation happens and that the island won't do anything while they're out there."

The recovery operation should have been completed earlier, she said.

"Four days is too long for the operation to come but we're finally doing it and that's the main thing."

In the days after the eruption, life in Whakatāne continues.

With only weeks before christmas, festive carols drift down the main street as two young girls, brass instruments in hand, busk for passers by.

But grief lingers in the air. 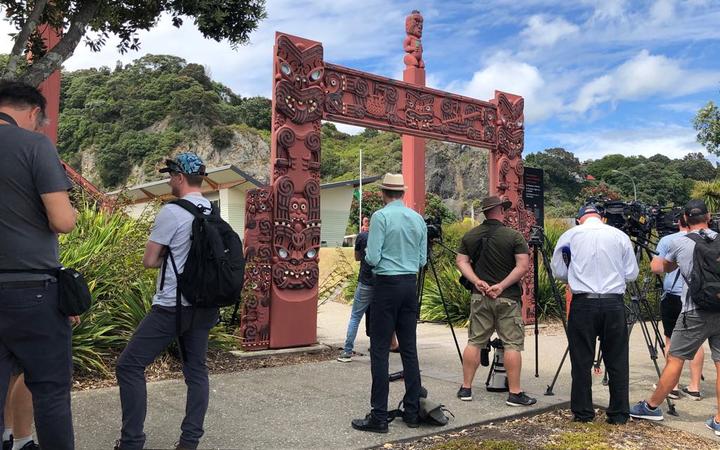 For the most part it's been a private process for those closely related to this week's events.

Not far from the town centre people gathered at a whānau home, with gazebos out back and cars lining the curbs. Men driving the local rubbish truck stopped for a kōrero.

In contrast, messages and flowers for those on Whakaari at the time of the eruption are left at the cordon fence near the boat ramp - a makeshift memorial and public symbol of a town in mourning.

"Often people have a hard time trying to express their emotions and so flowers fit that bill," a local florist said.

A steady stream of people were coming and going from her shop in the short time we were there.

"My business runs around emotion, whether it's happy or sad."

They then made their way to Te Mānuka Tūtahi marae for karakia, just like they have each day at 10am.

With both national and international media lining the pathways surrounding the marae, whānau were guided through neighbouring properties and into the back of the marae grounds to shield them from the cameras.

Since Monday's eruption the media presence in town is inescapable, with national and international outlets on the ground covering the story as it develops. 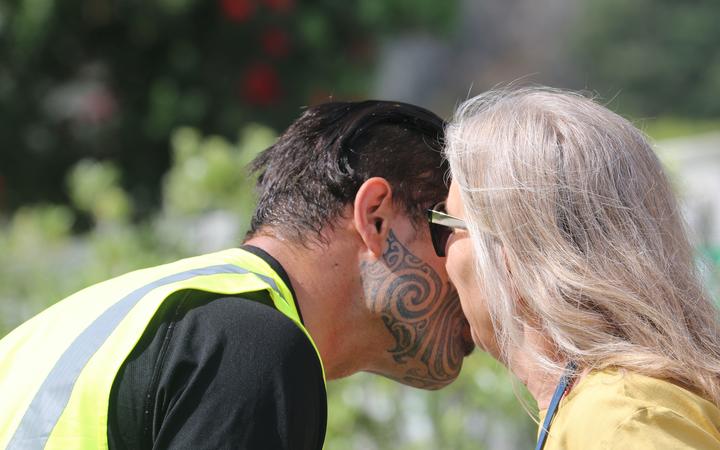 Standing at each of the entrances to the marae Māori wardens did their job of manaakitanga.

One was asked by a reporter if he could move so a cameraman could get a clear shot,.

The warden politely declined. "I don't think I should, these families are grieving and going through a hard time at the moment."

Locals who drove by slowed as they passed the marae, waving an arm out the window to acknowledge the significant job the wardens had.

One of them asked, "Is that police MP fulla making another announcement?

"I haven't been told anything, the only way I know what's going on is when I go home and watch your guys news," he said.

Waiata could be heard faintly coming from Mātaatua, the wharenui, and was echoed in the voices of the men outside.

During the karakia a young Pākehā boy came out of the wharenui with his mum to get some fresh air and two Māori women quickly stood in between them and the media.

It was hard to tell whether he was upset about what was going on inside, or if he was just hoha sitting still for so long.

With most media stationed in front of the marae, an older man walked along the shoreline pathway to the cordon. 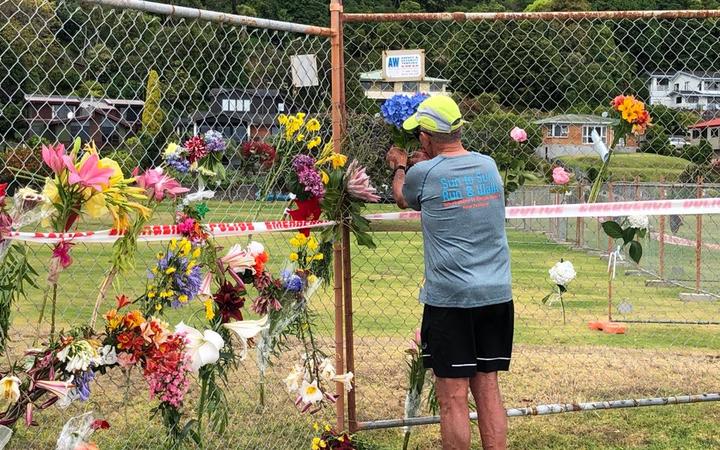 With a thread of string he carefully fastened a bunch of indigo hydrangeas to the fence.

The flowers came from his garden, he said, before taking a quiet moment for himself.

Much like all of those who came to lay flowers, his silence was soon interrupted by a reporter who was nearby.

While the cordon has become a place for locals and those visiting the area to publicly pay their respects, along the grass bank that borders it, reporters have gathered - the cordon has also become the backdrop for live updates from the town.

Just like grief, the shared space is something that sits differently for each person.

Earlier in the week local teens parked up on bikes to take everything in.

"We've missioned from around the coast." 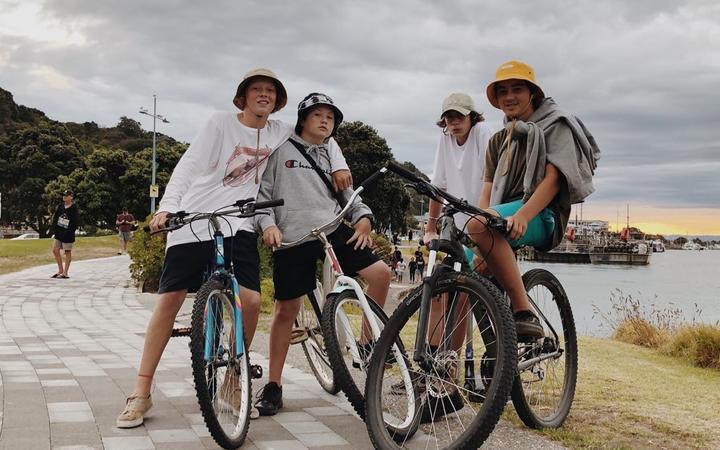 Whakatāne teens Logan, Fergus, Jayden and Josiah came from further around the coast to see what was happening at the cordon. Photo: RNZ / Murphy

They remembered Whakaari guides Tipene Maangi and Hayden Marshall-Inman from times they'd jumped off the wharf into the sea next to the tour boats.

"Are the news [crews] gonna be here all week?" they asked.

They were keen to talk about how nice it was to live in Whakatāne, how calm and warm the waters were, where the best local spots were.

As the sun set locals Will Kirk and Hani Totorewa created a peaceful atmosphere by singing waiata and sharing the legend of the maunga - Whakaari.

"She was trying to attract Putauaki with her smoke, but he was with Tarawera.

"He ended up leaving Tarawera to be with Whakaari but back then maunga could only travel at night time, by the time the morning came they had only made it to Kawerau and he got stuck there.

"Something along those lines anyway," Kirk said.

All locals have their own understanding of the Māori legends surrounding the town Whakatāne including the statue of Wairaka.

One of the families who stopped to chat spoke of how the statue signified wahine toa.

"The woman weren't supposed to paddle the waka back then but when the Mataatua waka first arrived at Whakatāne, the men left the women to come ashore and the canoe started to drift away.

"Wairaka brought them back to shore.

"Kia Whakatāne au i ahau - I will act the part of a man."

This cry is the origin of the town's name.

Nowadays Wairaka can be seen as you look out to Whakaari, through the cordon fence.