The driver of a truck that collided with a campervan and killed two Spanish tourists almost a decade ago says he will fight until his side of the story is believed. 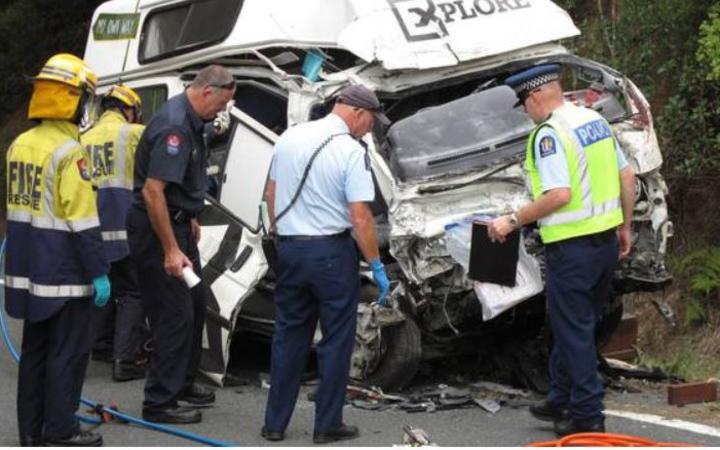 Eva Fajula-Rovira and Joan Roma-Serra, both 34, died instantly in the crash on 22 December 2009. Photo: NZ Herald

Joan Roma-Serra and Eva Fajula-Rovira, who were both 34, died at the scene of the crash on State Highway One, north of Whangārei, in 2009.

The first inquest into their deaths found driver error caused the accident.

A second inquest was opened this week, after the truck driver asked the Solicitor-General if he could give evidence after he failed to turn up to the first hearing.

On the first day of the hearing, the driver of the truck involved in the crash Ioane Etuale, said oil on the road afterwards proved he was driving a faulty vehicle.

Mr Etuale claimed the police covered the oil in absorbent powder and washed it away before photographs of the scene were taken, to cover up the evidence.

But Senior Constable Warren Bunn, who took the photos, said that didn't happen and there was never any oil on the road.

"For a major loss of control from a contaminant, I would expect to be seeing ... a wet road with diesel or oil sitting on it, but this is 22nd December, it's a nice fine summer's day, there would have to be a catastrophic dumping of oil to cause a loss of control.

Two vehicle inspectors who examined the truck after the crash told the inquest it had no major mechanical faults.

One of them, Denis Smith, said the power steering system was intact and the oil reservoir was full.

"No fault was found in the steering box ... there were no faults found on any other steering components."

Constable Bunn said a 40-metre stretch of the southbound lane of State Highway One leading to the crash site was damaged by "crocodile" or "crazy" cracking.

"From what we gathered, it didn't appear to affect car drivers, nobody sort of complained ... but truck drivers, it was definitely an issue for them."

Despite that, many truck drivers including Mr Etuale, had been able to drive over it safely before the crash, he said.

"Mr Etuale's vehicle has crossed over the centre line into the north bound opposing lane after he drove into the damaged seal.

"The corrugations have moved his truck across the centre line before he realised what happened. Once a trailer locked up, we was effectively out of control.

"For whatever reason, Mr Etuale has been caught out through lack of attention and was in the damaged seal before he realised it and the crash unfolded from there."

Senior Constable Bunn said his view has always been the damaged road was a contributing factor to the crash but Mr Etuale's failure to navigate it safely was the over-riding cause.

He was the final witness to be called.

Coroner Peter Ryan then asked Mr Etuale if he had anything further to add, as much of the evidence has contradicted his side of the story.