Strong winds in Wellington have forced multiple domestic flights to and from the city to be cancelled. 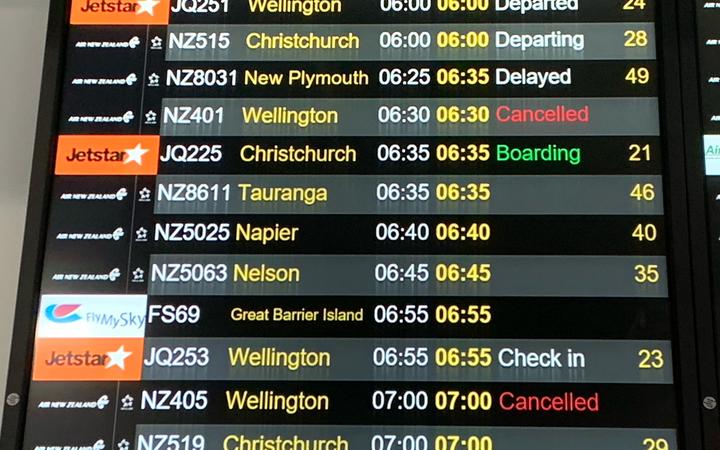 Air New Zealand yesterday told passengers it expected to cancel some flights to Wellington due to severe weather. Photo: RNZ

The high winds are hitting the centre of the country, with a warning in place for the capital and strong wind due in Nelson, Marlborough, Wairarapa, Taihape, Whanganui and parts of Taranaki.

In Waikato, a tree has fallen across a vehicle - reportedly trapping people inside - and blocking Airport Road in Rukuhia.

So far, 18 Air New Zealand flights from around the country, including Auckland, Blenheim, Tauranga, Timaru and Nelson, to Wellington have been affected.

As at 8am, 15 Air New Zealand departures from the city to regions, including New Plymouth, Blenheim, Nelson, Rotorua, Napier, Auckland, Christchurch and Queenstown were listed as cancelled.

Air New Zealand said its flights will be affected through to mid-afternoon.

It said it had put on extra flights later this evening and will "continue to explore additional capacity as the day continues".

The airline is offering fare flexibility for the next two days, where customers with cancelled flights will have the option to transfer their booking to another date, or hold the fare value in credit for up to 12 months for future travel.

Jetstar, Sounds Air and Golden Bay Air services were flying into and out of the Wellington.

Central New Zealand is being battered by very strong northwesterly winds, with gusts up to 137km/h recorded at Mt Kaukau and 105km/h at Wellington Airport.

MetService meteorologist Tahlia Crabtree said things would stay gusty until 6pm when the wind warning finished for the Wellington region.

The Wellington City Council said a street light was down on Aotea Quay and had been moved off the road, trees had fallen in Makara, Strathmore, Island Bay, Thorndon and Hataitai.

It said power lines were damaged in Tawa and Hataitai - and crews were on their way to Takapu Road because lines were down.

As well, it said a power pole had fallen in Karori - with Wellington Electricity at the scene.

Rain is also on the way to accompany the wind this afternoon as a front moves up from the south.

Damage to trees, powerlines and unsecured structures might also occur due to gusts.

Windy Welly living up to it's name! Gusts of 83 km/hr have been recorded at Wellington Airport this morning, and it's only going to get windier. There is a strong wind warning in place for the region until this evening https://t.co/Sd5C6lJ4hl ^Tahlia

Strong north to northwesterly winds prevail today, with the strongest winds ahead of a front moving up the country. Wind warnings and watches are in place for a number of areas. Check https://t.co/qHyE5zySvx ^Tahlia pic.twitter.com/ITgqJQldPU

All Cook Strait ferry sailings are running as planned, but local services have been affected by strong wind.

Ferries departing from Days Bay and Queens Wharf are running under a restricted schedule and commuters are advised to check Metlink's website for an up-to-date timetable. No ferry services are operating out of Seatoun until this afternoon.

KiwiRail said high winds in Marlborough were causing delays in berthing the Interislander ferries in Picton.

Interislander executive general manager Walter Rushbrook said at this stage no sailings had been cancelled, but the company was continuing to closely monitor the situation.

Mr Rushbrook said they regretted the inconvenience to passengers and freight customers but safety was a top priority.

As the gales hit central parts of the country, the West Coast of the South Island is in for heavy rain.

Metservice said hail, strong winds and thunderstorms were forecast for the West Coast today and tomorrow, and more rain looks set to affect western areas of the South Island again this week.

Franz Josef had received just under 200 millimetres of rain in the past 24 hours, with just under half a metre 400mm recorded in the mountains.

The latest thunderstomr risk chart for today shows a high risk for West Coast, including large hail, into this afternoon, then a moderate risk for Southland, Clutha and Dunedin this afternoon. https://t.co/BZWb806UfN ^RK pic.twitter.com/xLOdMCPyNn

Meteorologist Tahlia Crabtree said it had rained consistently overnight, with a heavy rain warning stretching from Westland to Buller for the rest of the day.

"We've had a number of stations recording upwards of 100mm over the last 12 hours with some stations getting hourly rainfall rates of 20mm or more," she said.

"Which is quite a lot of rain when it's consistently falling over a long period."

Ms Crabtree said the rain was not heavier than usual for the region but lasting longer.

"Our heavy rain warnings are out, and there are risks of surface flooding, and rivers and lakes rising rapidly as the high rainfall gathers."

Nelson and Tasman are also faced with a heavy rain warning as the front moves across the country spilling rain onto the ranges.

Ms Crabtree said from mid-morning to midday would be the worst for the district.

Thunderstorms are also forecast for the west of the South Island, especially in Westland and northern Fiordland.

But easterly parts of the country will see some warm temperatures, peaking at 30C around Hawke's Bay today and tomorrow. 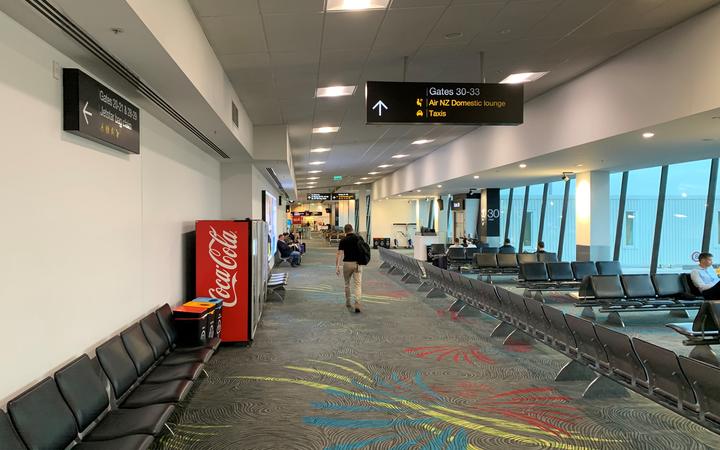 Auckland's domestic terminal is quieter than normal this morning, after cancellations to flights to Wellington. Photo: RNZ

MetService said driving might be hazardous, especially for high-sided vehicles and motorbikes.

Motorists travelling over the Remutaka Hill Road near Wellington and on the Desert Road are being warned to take care because of strong winds.

Heavy rain has also closed a number of roads and highways in the South Island.

NZTA said heavy rain, slips and fallen trees have closed or restricted travel on several areas of State Highway 6, which runs the length of the South Island.

SH6 near Haast is closed due to slips and trees brought down in the wet weather, but is likely to be cleared soon.

The state highway at Inangahua Junction is also closed due to flooding and high water levels in the Buller River.

A slip at Lake Gunn on the Milford Road, State Highway 94, closed that highway after 8.30am today.

Drivers are advised to check NZTA's traffic and travel pages for updates.

The Otago Regional Council said headwater rivers feeding into lakes Wakatipu and Wanaka have risen significantly during the night, and levels were rising.

The Queenstown Lakes District Council has now placed its emergency management team on standby as a precaution.

A regional council spokesperson said Lake Wakatipu was at levels that threaten low-lying reserves and could enter the stormwater system in Queenstown from tomorrow morning.

The Clutha and Kawarau rivers are also rising.