Schools and health advocates are launching an advertising campaign to stop teens picking up vaping. 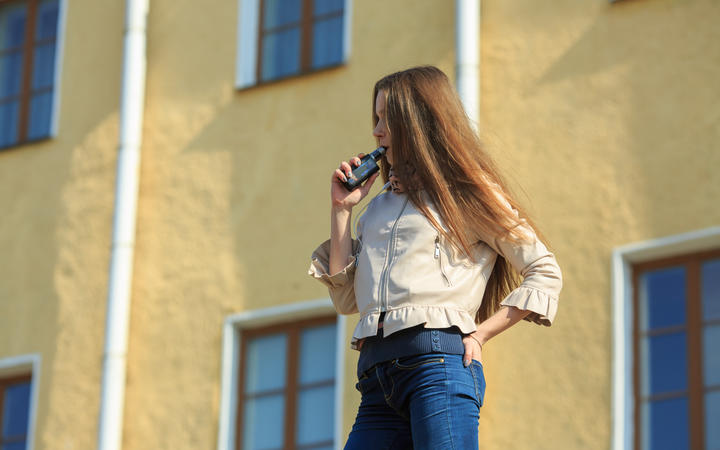 The Asthma and Respiratory Foundation says they want to counter the public perception that vaping is harmless, which is misleading young people.

Teens are being "sucked in" by marketing that is attractive to young people, particularly on social media, and products are visible in dairies and accessible to them because the market is unrestricted, the foundation's chief executive, Letitia Harding says.

"Schools I have spoken to have all said this is now becoming a big issue, it's time to ensure that our youth aren't taking up vaping.

Ms Harding says there is also evidence vaping can be a gateway to smoking.

"We also don't want kids who were never smokers, or are at very low risk of taking up smoking to become addicted to vaping products, and just have a whole different problem."

She hopes more research can be carried out to find out how common vaping is among young people.

More than 60 health advocates, school organisations and community groups have sent an open letter to the government calling for restrictions on sales and better protections for young people.

But the Health Ministry says it cannot crack down on e-cigarette companies targeting young people because vaping products aren't covered by the current smoke-free legislation.

Vaping Trade Association spokesman Jonathan Devery says the group represents about half of small providers in New Zealand, and all of its members only sell to people over 18 years old.

Most of the problems exist because of international online providers and because the market is unregulated, he says.

"We are totally against youth marketing and are all for R18 sales. We've been requesting regulation for over five years now, so it's been a very slow process, with little to no communication from the ministry at all.

"It was promised over a year ago, and we're still waiting. So it's been frustrating."

Mr Devery says the Association is not in favour of indications the government could ban flavoured vaping products out of concern they are aimed at children. The flavours are useful to help adult smokers quit, he says, and the group has concerns tobacco marketers are targeting youth.

"The [government] believe flavours are enticing to children, but there's no international evidence to suggest that, there's actually a US study that found the preferred flavour among youth was actually menthol, so it makes no sense at all.

"It would just hand the keys back to traditional tobacco companies, because a lot of users would just go back to using tobacco. Cigarettes don't taste good, it's the addictive part of cigarettes that make people go back to it, so adults start with tobacco flavoured products, and can transition to the other flavours in the market."

An Otago University study released this week found only 10 percent of websites selling e-cigarettes asked for proof of age.