Forty years on from the Erebus disaster - in a bonus episode of the RNZ/Stuff podcast White Silence - former Air NZ staff talk about how they got through the tragedy together. 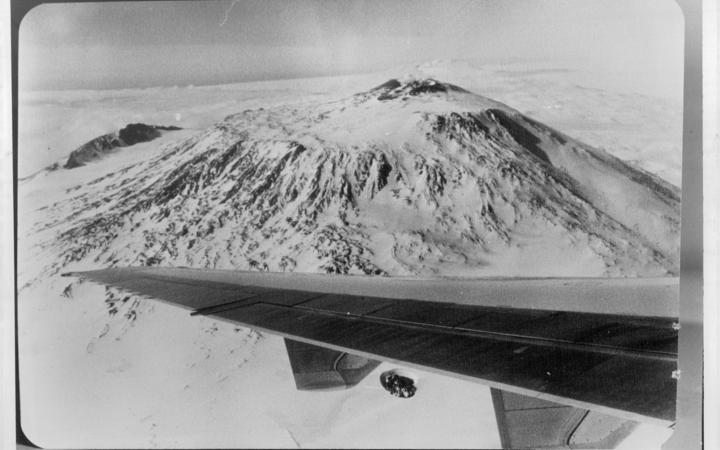 This story is part of White Silence, a six-part podcast series from Stuff and RNZ to mark the 40th anniversary of the Erebus disaster. You can listen to White Silence on RNZ and the RNZ app, on Stuff, or via Apple Podcasts, Spotify, Stitcher, or any other app using the RSS feed.

For Annie*, 28 November 1979 began as just a regular day at work. She was doing a 2-10pm shift as ground staff for Air New Zealand working in the documents department underneath Auckland Airport.

Before the digital age, all the flight details were collated and stored there and, as she returned to the department from the check in area in the late afternoon, she found a policeman waiting for her.

"Normally when there were policemen in the documents section they were looking for a naughty person who had come in or out of the country ... and I said 'oh, who's been naughty this time?'

"The policeman said 'no, no, no I need the 901 flight file because the plane's missing."

Annie didn't know that yet but the policeman's words were her first sense that something was amiss.

The 901 flight was TE901, the Air New Zealand sightseeing flight that travelled to Antarctica several times a year. The day flights were a rare opportunity for tourists to see the icy continent for themselves and take photos of the dry valleys, all with a glass of champagne in hand.

The flight did not return. It had crashed into the slopes of Antarctica's live volcano, Mt Erebus. All 257 people on board were dead.

From there things became a bit of a blur but, a few hours later, between about 8 and 9pm, ground staff were told to get ready.

Air New Zealand was about to make an announcement to the relatives of passengers who were anxiously waiting for news.

Annie and her colleagues were asked to go into the room and help anyone who needed it.

"It is a blurred recollection but I can remember them saying that by 9pm the plane will be out of fuel and we still don't know where the aircraft is," she said.

The news was greeted by silence.

"I think 'stunned mullet' would absolutely sum it up. I think there was absolute just dead silence because it was such an unexpected announcement that people were having to come to grips with it ... and I guess after, I don't know, a minute or something like that, then people were asking questions like 'where can it be?'"

Annie stayed long beyond her shift that night, talking to a group of men who had been supporting their friend. His wife was on the plane.

She left about 1am as shocked as the passengers.

"State of disbelief. State of 'How can that happen? How can a plane go missing? What's going on?' Just in a fog really."

She still can't remember if she learnt that the plane had crashed that night or the next morning but she attended a memorial service a few days later and spoke again to the young man who had lost his wife on the flight.

Shortly afterwards she was contacted by Air New Zealand's Human Resources Department who said the man had appreciated her help on the night and would like to meet again to talk.

"He was quite disturbed of course and very, very upset about his wife dying and I have had no counselling training or anything but you can only just be as empathetic as you can be. Unfortunately he just couldn't bear it."

Annie had been meeting the man over several months while retraining as flight crew and her first flight was to Hong Kong. When she returned several days later, she was met off the plane by colleagues.

"They pulled me aside and told me that he had taken his life."

She was told he had left a note which was at the Papatoetoe Police Station and she asked to see it and was turned down, possibly because she wasn't family.

"I can understand that but there was absolutely no follow up from Air New Zealand whatsoever," she said.

Nor was there any counselling offered.

"Don't be silly. Back in those days counselling was a new word. It didn't even exist."

Annie says she was angry about the way Justice Peter Mahon was treated when his Royal Commission of Inquiry exposed some errors by Air New Zealand, but she believed the airline had learnt a huge amount from the Erebus experience.

"I did feel that Air New Zealand didn't offer enough support to people like the man who I had met. But that's hindsight also because things have changed so much now."

On the 30th anniversary of the crash, in 2009, Air New Zealand apologised to family members, saying people did not receive the support and compassion they should have.

The government acknowledged that the actions of Robert Muldoon's then administration had been flawed and said it should have better attended to the needs of the victims' families.

Another 10 years on, and Prime Minister Jacinda Ardern has taken it a step further, making an official apology on behalf of the government and Air New Zealand, which was fully state owned at the time of the crash.

Every year on his birthday John 'Pogo' Watson thinks about the Erebus Disaster. He's been doing it for the last forty years.

That's because he was on standby for TE901.

Mr Watson didn't want to name names out of respect for those who died but said if the Chief Purser on the flight had pulled out for any reason, "I wouldn't be talking to you today".

Another good friend was on the flight; the senior steward who had come around the night before to help Mr Watson clean his swimming pool.

"He was at my house stating that he didn't feel like going on the flight because it was his son's fourth birthday the next day."

Mr Watson asked whether he'd consider staying home for it, but in the end his friend 'turned to and went to work'.

"Damned if you do and damned if you don't. If he'd pulled out and somebody else had been called out he probably would have carried the burden of making that decision,' he said.

On the evening of the 28th, Mr Watson was out to dinner when he was called by his wife and told to get to a TV.

There he learnt that Flight TE901 was 'beyond the realm of return'. He understood this to mean it was out of fuel and must be lost.

Mr Watson went to find his friend's wife. A crowd had already gathered outside their house but she had gone out for dinner with friends.

His voice shakes a little as he recalls breaking up the dinner party and taking her aside to a private area to break the news which she received with "complete silence and quite a bit of shock".

And so began the business of carrying on.

Two days after the crash, he was back on a flight along with a steward who had lost his brother at Erebus but insisted he could carry on.

Mr Watson recalled that newspapers featuring stories on the crash weren't handed out on all flights.

"But that didn't stop other passengers bringing on their own newspapers et cetera. It was a confusing and questionable time for us all [in the] aftermath of that: how, and why, and questions being asked."

Most of the passengers were supportive but the odd 'clown' put some of those questions directly to the crew.

"'Do you know anything about Erebus? What do you think about it? You blokes don't know what you're doing', things like that, you know, unprofessional remarks.

"One of the stewards down the back, a senior steward, was going to pull a passenger out of his seat but luckily with the help of everybody that was quickly defused."

Staff also formed a support group for the families of the crew killed on the flight.

Pogo Watson took part for two years. "In the end it was taking too much of an effect.

"It was very hard because I still had it in my mind as I do today that if the Chief Purser had gotten sick, I wouldn't be in this lucky position today."

But the crew stayed tight.

"We bounded together as one. Forget rank. You form a circle and protect each other."

*Prefers to use only her first name

You can listen to White Silence, a podcast on the Erebus disaster, on RNZ and the RNZ app, on Stuff, or via Apple Podcasts, Spotify, Stitcher, or any other app using the RSS feed.