The winner of Bird of the Year 2019 has been revealed after a tight contest between the hoiho and the kākāpō. 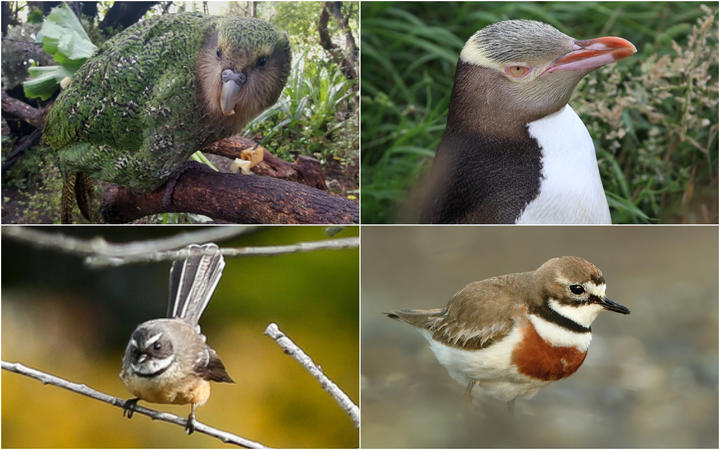 The hoiho, or yellow-eyed penguin, has been proclaimed the victor with more than 12,000 votes - marking the competition's first seabird winner in its 14-year history.

This is the first time voters have been able to rank their preferences for the birds, instead of the first-past-the-post system used previously.

The hoiho had been neck and neck with the kākāpō until the seabird managed to clip its rival's wings in the last few days in the Forest and Bird contest, which is decided by public vote.

Backing for the hoiho to take the title came from a raft of supporters, including a coalition between all four penguin teams (hoiho, kororā, tawaki, and rockhopper), Dunedin rockers The Chills, and two Dunedin mayors.

"The hoiho are goregous if you've been lucky enough to see them leaping out of the water onto the sand and waddling up to their sandy nests or foresty nests ... and who doesn't love a penguin?"

Hoiho are an endangered species and the world's rarest penguin, with only 225 pairs remaining on mainland New Zealand in 2018/19.

They face numerous environmental threats as well as risk of being caught in fishing nets.

"Sadly for hoiho, there's quite a few problems that are facing them," Ms Hubscher said.

"There's the sort of problems that are a bit more intractable and harder to do something about in the short term, and that's things like climate change affecting the ocean temperature, which is changing their food distribution - makes it harder for them to catch a feed," she said.

"But there's other issues that we can do things about, so those are things like human disruption. Maybe tourists [getting] a little too close than they should and things like fishing as well. We know that bottom trawling is affecting penguin feeding habitat and there's a sad case a few years ago, quite a few penguins were caught in set nets down that way.

"So hopefully we've got some marine reserves coming on the way for the Otago region, hopefully, in the next year or so that might help out our penguin friends."

She said the black robin and pīwakawaka were perennial favourites over the years, but she was pleased to see the banded dotterel fighting its way up the leaderboard.

The contest has been known to attract a lot of fun online, with memes and jokes taking over social media in the voting period.

Forest & Bird said hoiho was teased for being the bird most likely to take a date to McDonald's for a Fillet-O-Fish.

It said kākāpō took a lot of heat, being labelled boomers and moss chickens, while the kererū - which took top spot in 2018 - was accused of being drunk and not fulfilling last year's campaign promises.

The hoiho has made history today! In a huge upset, the hoiho has come from behind to shatter the feathered ceiling, and become the first penguin to win #BirdoftheYear. pic.twitter.com/zkobWlTZMb

Forest & Bird spokesperson Laura Keown told RNZ at the start of voting that although the competition is light-hearted, it also raised awareness of New Zealand's native birds and the threats they faced.

"When you visit the bird of the year website you can see the threats facing our birds and unfortunately over three quarters of our birds are in serious trouble and may be facing extinction."

Read and listen to The Detail's backgrounder on the serious message behind a fun competition: