A woman has told the historic abuse inquiry she was sexually assaulted by a nun and repeatedly raped by foster parents. 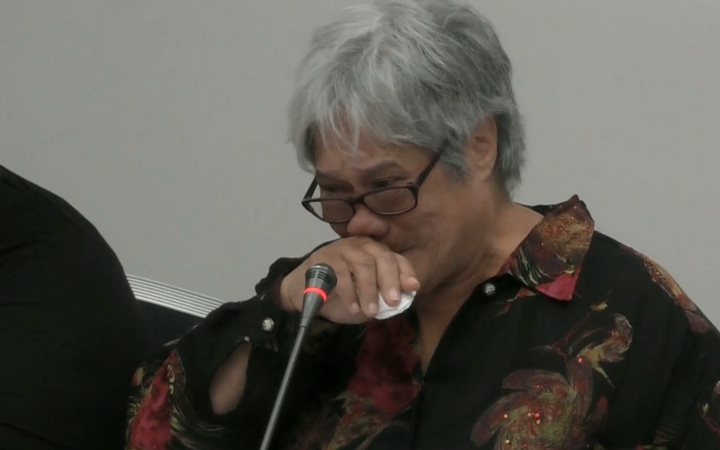 Annasophia Calman says she didn't know what it was like to be a woman because of being raped. Photo: Abuse in Care Inquiry / Screengrab

Annasophia Calman told the Royal Commission of Inquiry into state and faith-based care that because of the abuse she doesn't know who she really is.

Mrs Calman shared with the Commission the harrowing details of her violent family home publicly for the first time.

"Nothing in our cupboards, beaten by our father while he was drunk and we had to be eating out of rubbish bins to survive."

She told the inquiry it wasn't just physical violence she had to endure.

"I was one of the rape victims by my brother and my mother's step-brother. We had the shield taken away from us, we didn't know who to trust. Do we trust the people that victimize us, or do we trust the person like myself.

After several complaints were made to Social Welfare, Mrs Calman and three of her six siblings were taken to the Catholic-run Nazarath House in Christchurch.

She told the inquiry the nuns in charge of the home were violent and often thrashed their knuckles and thighs.

Mrs Calman endured years of violence there but complained to the police when this happened.

"The day I climbed out the fire escape window was the day I got touched by a nun, that freaked me out. It's bad enough a man did it to me, now a nun does it to me."

When she complained about the assault to other nuns at Nazarath House she was beaten.

Social welfare eventually removed Mrs Calman - separating her from her siblings - and sent her to live with a foster Whānau in Waitara.

She told the inquiry her foster father would pull her hair out and hit her with a jug cord and she was raped three times.

It took several complaints and a meeting with her foster mother before she was removed from their care and placed a foster Whānau in Opunake.

Mrs Calman described what her foster father did next.

"He raped me too, he took me to his room and raped me. I'm meant to be looked after by him but no, I got raped."

Annasophia told the inquiry when her foster mother discovered what had happened, she decided she didn't want to care for her anymore.

It was during her time with the Opunake foster family that she met a man and she fell pregnant with her first child.

A short time later, she met another man and moved in with him and his mother.

She was 17 years old when she had her second child, a baby girl.

Annasophia said her partner was extremely violent - more violent than her father.

"My children saw the abuse I was going through and the state ward knew all about it because I was battered and bruised and nothing got done to save my life. My kids would have been left without a mummy."

Annasophia told the inquiry being repeatedly raped as a child meant she had no identity.

"I felt there was no adult part of me inside of me, my adult hood is actually starting now. I don't remember my age, I do now and...everything was just taken, I don't know who I really am."

Annasophia instructed Cooper Legal to file a legal claim against the Ministry of Social Development in 2015 - she is still yet to hear back.

She learnt to read and write when she was 30 and has since written a self-published book about her childhood.

The lawyer representing the Catholic Church, Sally McKechnie addressed Annasophia Calman at the end of her testimony.

"The current leadership of the Sisters of Nazareth were not aware of what had happened to you in St Joseph's orphanage until they saw your evidence and they were very concerned to hear what has happened to you.

"They hope they can meet with you and talk to you about how to help with your healing."

The two-week hearing in Auckland will conclude this afternoon.

The Royal Commission's next sitting will be in March next year.