Warning: This story contains details that may be distressing to some readers.

A jury has watched a compilation of CCTV footage showing Grace Millane at various bars and eateries during a three-hour Tinder date with the man accused of murdering her. 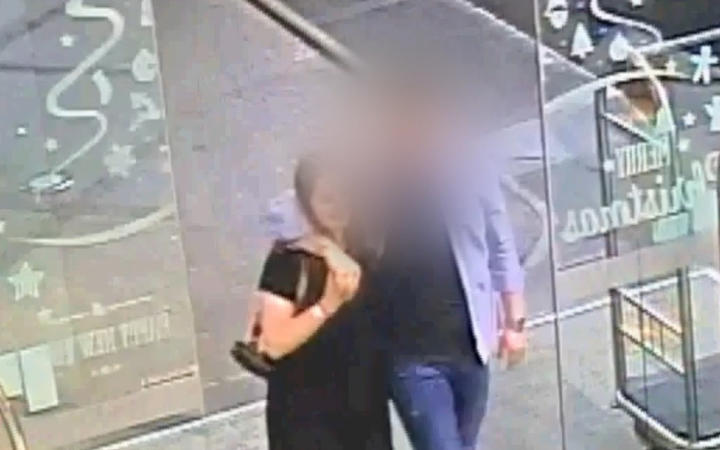 The 27-year-old man, who has name suppression, is charged with murdering the British backpacker in his CityLife apartment on the night of 1 December last year.

The Crown's case at the High Court in Auckland is that the man strangled Ms Millane before putting her body in a suitcase and going on another Tinder date. The defence team argue her death was an accident after he applied pressure to her neck during rough sex with her consent and encouragement.

Yesterday, the jury heard the accused watched pornography and took explicit photos of the young woman in the early hours of the morning.

This morning he told the jury he gathered six days of footage from CCTV cameras in Auckland's CBD to track the movements of the defendant and Ms Millane.

The court watched a compilation of this footage, which began with the accused entering The Bluestone Room at 5.11pm on 1 December. He drank a beer then left the city pub at 5.40pm, about the same time Grace Millane is filmed leaving Base Backpackers on Queen Street.

Cameras at the base of the Sky Tower film Ms Millane walking along Federal Street and stopping at a crowd milling about a festive Christmas display.

The jury has heard - from Ms Millane's father David, who was sitting in the public gallery with her mother Gillian this morning - that the last message she sent her family was a picture of a Christmas tree with the location pinned at SkyCity.

A few minutes later in the footage, the defendant crossed the courtyard towards Ms Millane and they hugged before walking away together. 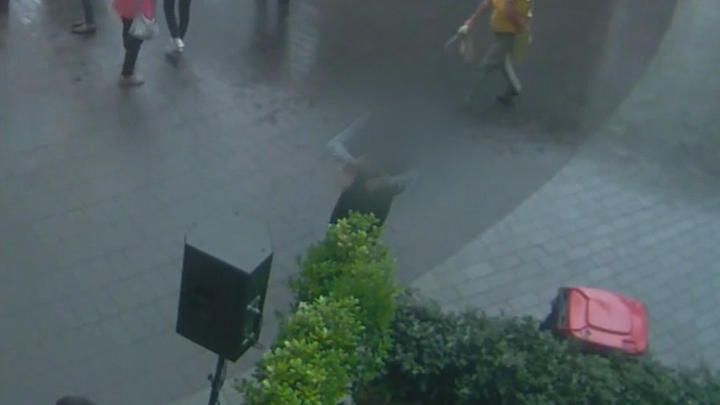 The defendant and Grace Millane shown on CCTV footage meeting for the first time at the base of the Sky Tower in Auckland. Photo: Supplied

They walked into SkyCity to Andy's Burgers and Bar on the first floor where they looked at menus and ordered before sitting at a booth. Two receipts show they ordered a number of cocktails and tequila.

About an hour and a half later, about 7.15pm, they left SkyCity and walked down Federal Street to Mexican Cafe on Victoria Street.

The pair shared three jugs of margarita and sangria and left the restaurant about 8.30pm, at this point having spent nearly three hours together.

CCTV cameras filmed them walking through the CBD to The Bluestone Room where they settled at a small table, talking and kissing.

Ms Millane and the defendant kissed at various times in the busy bar; now three hours into the date.

At one point the accused physically pulled her closer by putting his arm around her shoulders.

The accused could be seen picking up Ms Millane's handbag when she disappeared from view; looking through through its contents before putting it back down.

When she returned he stood up to kiss her then hug her as she leant her head into his chest before they leave The Bluestone Room together.

The jury heard the couple ordered a beer, eight ciders and two tequilla shots in total at the city bar.

CCTV footage filmed them walking, the accused's arm around Ms Millane, to CityLife where they entered the lobby and caught the lift to the third floor to the defendant's apartment.

The court has heard Ms Millane's body was carried out of the apartment in a large suitcase the following day.

A detective yesterday described finding the suitcase buried in a shallow grave in native bush in the Waitākere Ranges - some 25km from Auckland city - about a week later.

British backpacker Grace Millane was travelling through New Zealand on a worldwide OE after graduating from university. Photo: Supplied / Facebook

The defendant's lawyer Ian Brookie this morning began cross-examining Detective Adam Bicknell about the volume of alcohol his client and Ms Millane had consumed.

The jury heard the pair appeared to drink heavily over the course of the three hour date and began watching the 90-minute CCTV footage filmed at The Bluestone Room in full.

The accused cried as Mr Brookie made brief opening remarks yesterday and remained visibly upset as David Millane's statement about his daughter's life was read aloud to the court.

Today, he sat calmly in the dock watching the CCTV footage along with the rest of the court, dressed in a navy suit.

The Crown is expected to call 36 witnesses for its case, led by Solicitor for Auckland Brian Dickey over the coming month. Robin McCoubrey, Brian Dickey and Litia Tuiburelevu of Meredith Connell are also acting for the Crown.