WARNING: This story contains graphic details that may be distressing to some readers.

The police officer who found Grace Millane's body in the Waitākere Ranges has described tracking cell phone data to a shallow grave.

Ms Millane went missing from Auckland's CBD on the eve of her 22nd birthday while travelling on a worldwide OE.

She had met a 27-year-old man for a Tinder date and died in his apartment sometime between 1 and 2 December.

The man, who has name suppression, is now on trial in the High Court at Auckland accused of murdering her.

The Crown allege he strangled her to death, while the defence says Ms Millane accidentally died after he applied pressure to her neck with her consent and encouragement.

The jury has heard the man watched pornography and took seven explicit photographs of Ms Millane that evening but whether she was dead or alive at the time is disputed.

It has also heard the man contorted her body into a large suitcase the following morning before going on a Tinder date with another woman and later burying the bag in the Waitākere Ranges.

This afternoon Detective Evan Ingley described finding the suitcase in a shallow grave about 10 to 15 metres into dense bush off a gravel carpark on Scenic Drive.

"I could see an area of ferns and some trees that looked like they'd been broken off and placed on top of an area ... they were piled on there haphazardly," he said.

The jury was shown scene photographs which showed a large, light-coloured suitcase sitting in a shallow grave with broken sticks and branches nearby. 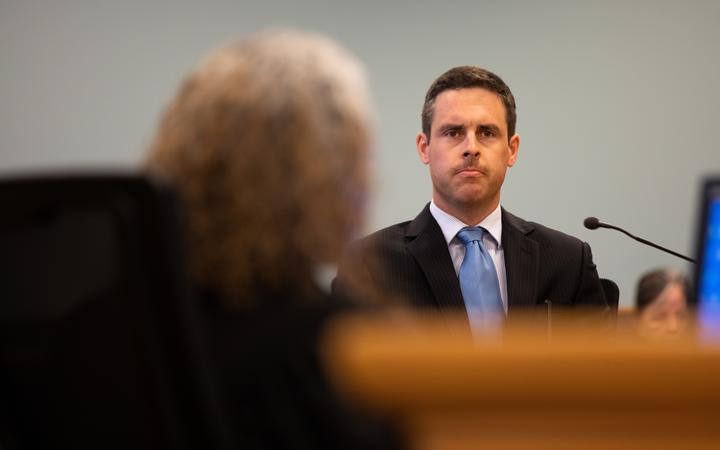 Detective Lewis Sin, the officer in charge of Ms Millane's body, told the court a pathologist at the scene - Dr Simon Stables - confirmed there appeared to be human remains in the suitcase.

He accompanied the suitcase, sealed in a body bag, to the mortuary and returned the next morning for the post mortem examination.

Crown prosecutor Brian Dickey asked him to explain what he observed when the large bag was first opened.

He described the way the body had been placed inside the suitcase.

Ms Millane's mother held her hands over her mouth as she heard the details, including Mr Sin confirming Ms Millane's body was "tightly packed" in the suitcase.

Mr Sin said he recovered a pair of hoop earrings and a small tag with the word "freedom", which was stuck to the young woman's back.

They cried as Mr Millane's statement, describing his daughter's background and the last weeks of her life, was read to the court by Crown prosecutor Robin McCoubrey.

Ms Millane had been in daily contact with her parents and two older brothers as she embarked on her year-long OE.

Her last message was a photograph of a Christmas tree near Auckland's Skytower around 6.30pm on 1 December.

The court heard she grew up in Billericay, Essex, and was living with her parents in their family home before she went travelling.

She studied at the University of Lincoln and graduated in September 2018 with a bachelor of advertising and marketing.

Her father described her as a "gregarious and outgoing" character who got along with everyone: "What you saw is what you got".

"She got on well with different generations; older people liked her and her younger cousins, nephews and nieces related well to her.

"When Grace went to Lincoln University I feel like she started a bit of a stampede and several of her cousins followed her there."

His daughter picked her social circle carefully and was at the same time not overly trusting nor overly shy around new people, Mr Millane said.

He said his daughter meticulously planned her gap year and left on 26 October with a plan to be back in June 2019 for a wedding in the family.

The court heard Ms Millane then set off for South America, seeing some of the places her mother had travelled too, all the while keeping in regular contact with her family through WhatsApp, Facebook, Instagram and text messages.

This contact continued on her arrival to New Zealand, where she travelled to Northland and shared photos of toys and clothes she'd bought for her niece.

Mr Millane said his daughter seemed in "good spirits" and planned on travel on to Vietnam, Cambodia and Thailand before returning home.

He flew to New Zealand shortly after Ms Millane went missing and was there when investigators discovered her body in the Waitākere Ranges.

In his statement, Mr Millane said his daughter had two boyfriends growing up but had never discussed online dating with him or his wife.

"All I know is all the kids these days are dating online and it seems to be how younger people meet each other.

"I don't believe children tell their parents everything and nor should they necessarily."

The accused cried in the dock today as his lawyer Ian Brookie made a brief opening address to the jury.

The court briefly adjourned at midday after the 27-year-old indicated he was feeling ill and requested a break.

The trial before Justice Moore and a jury of seven women and five men is set down for the month.