Some early childhood centres are worried proposed rules recommending a ban on some foods are too strict. 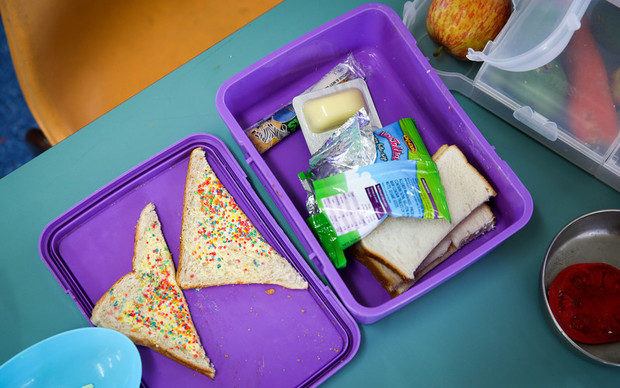 The Ministry of Education says under-fives are at heightened risk of choking because they have small air and food passages and haven't learned how to chew properly yet. Photo: RNZ / Alexander Robertson

The Ministry of Education is considering guidelines for foods that pose a high choke risk for young children.

They recommend excluding foods such as sausages and popcorn altogether and modifying others - such as apples and carrots, which should be grated before serving to children under the age of three - before they are served.

The ministry said under-fives were at heightened risk of choking when eating because they had small air and food passages and many had not yet learned how to chew their food properly.

Kathy Wolfe, chief executive of Te Rito Maioha, which represented about 600 early childhood centres, said its members would have mixed views on the proposed regulations.

"Some will say they're not particularly happy and others are saying they're doing it anyway. I think the sector is just feeling a bit of pressure in terms of more regulation and compliance and just getting a little bit concerned about the policing of food safety," Ms Wolfe said.

However, children's safety was the most important thing, she said.

But she also said choking was not a common problem in early childhood centres.

"Probably the area that will be tricky will be for those services that don't do food prep and food comes from home, so it is also about educating parents," she said.

At Adelaide Early Childhood Centre in Wellington, head teacher Karen O'Leary said children came to the centre with their own lunch boxes and many of the foods on the list of high-risk foods were consumed most days.

Despite that, she could recall only one food-related choking incident in the past 19 years, when a child had choked on an apple.

Teachers needed to be aware of the risk of choking but was not sure if the proposed guidelines would help, she said.