Ten organisations, including police, insurers, and other government agencies, are investigating the cause of the fire at the SkyCity International Convention Centre. 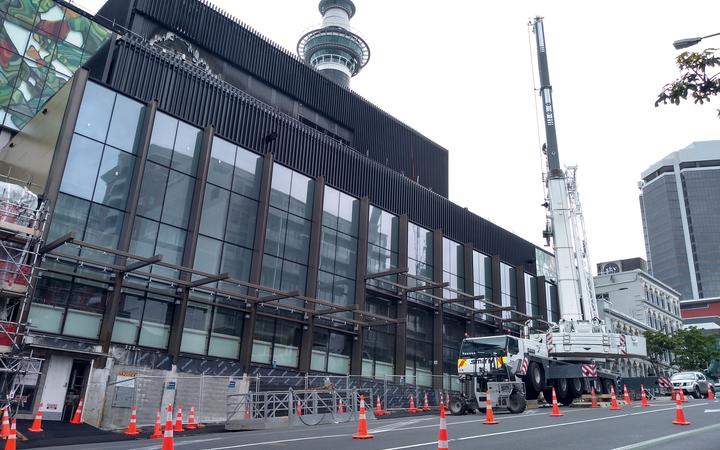 Cordons around SkyCity remain as firefighters continue to monitor and investigate the damaged roof area where the blaze erupted. Photo: RNZ / Amy Williams

Fire and Emergency Region Manager Ron Devlin said the agencies were co-operating as they mapped the affected areas and followed up on inquiries.

Mr Devlin said they were examining the roof area in baskets suspended by cranes but significant damage to the roof had been hampering efforts to access it.

It was not yet known how long the investigation would take, he said.

Mr Devlin said the firefighting effort had scaled back to two crews, with the last flare-up at the fire-ravaged building happening at 6pm yesterday.

It's been a week since the blaze started, and many of the cordons around the building have been lifted but drivers are still being told to avoid the area if possible.

Fletcher Building said its workers have still not been able to get back on the site, but all of the all its employees were being paid, and subcontractors were being paid up until the date of the fire.

It said until the investigation was completed, it would not able to assess the extent of the damage and work out a timeline for recovery works and the rebuild.

The Ministry of Justice says about 1000 cases have been affected by the closure of courts in Auckland because of the SkyCity fire.

The blaze at the SkyCity International Convention Centre last Tuesday forced the closure of the Auckland District Court and Chorus House.

The ministry said an inquest had to be adjourned and a jury trial was shifted to the High Court.

About 1000 cases were either adjourned or not heard at all, it said.

The court has added extra hearing days in the coming weeks for all affected cases to be rescheduled to.