Biologists are keeping a watchful eye on a resident Auckland leopard seal who may have been shot in the face at the weekend. 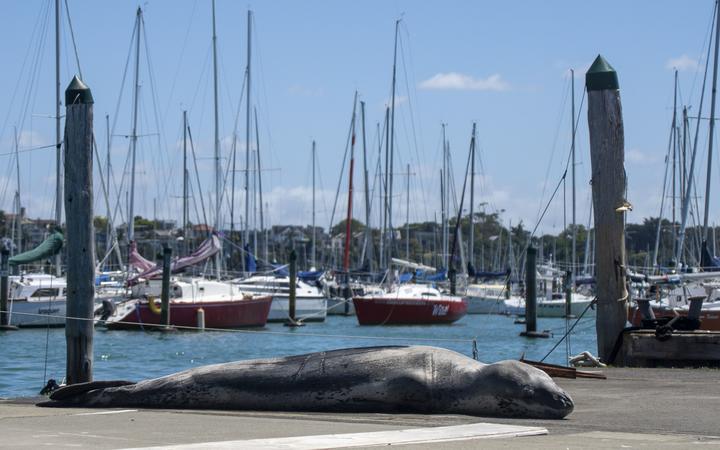 Owha was found with a deep injury above her nostril - believed to be a gunshot wound - on Saturday.

Marine biologist Brittany Mathias, from leopardseals.org who has been working with Owha 2016, said the wound had now stopped bleeding and there was no swelling around the seal's nose.

Observers, who have been consulting vets, have been watching her since the wound was discovered.

They still hold grave concerns that if they try to sedate the seal she may slip into the water before it takes effect and drown.

Owha's behaviour will continue to be monitored throughout the day to look for signs of infection or deteriorating body condition.

Leopard Seals New Zealand has thanked people for their concern and support for the sea creature, who has gained a public profile in recent years. 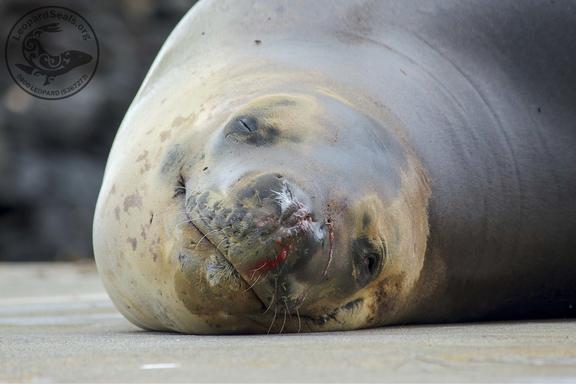 Owha the seal is now recovering from her wound. Photo: Rick Bout / Leopardseals.org

"Please keep sharing the posting about her injury as we want to identify who did this to her. Thank you for those of you who expressed their outrage and have passed along kind words of support for Owha."

It also reported the biologists and vets working with them had considered how to make Owha more comfortable.

"We have discussed options for administration of pain relief and antibiotics, but these would have to be administered remotely and the trauma of injecting her may prompt her to move away from the areas that she prefers.

"If that happened we would not necessarily be able to monitor her and put the next steps into effect, should infection set in."

Owha had never attacked anyone, but one of her favourite things to do was to bite inflatable dinghies, Ms Mathias said.

She was not quite sure how many have fallen victim, but it was more than 60.

"I think it's a bit of a play behaviour, a bit like a dog with a chew toy," she said.

"She's really curious and a little bit cheeky and she'll follow people in the boat to see what they're doing. She seeks out the attention of people and she just enjoys being in Auckland."

Ngāti Paoa Trust Board's environment officer Karla Allies said people needed to understand that they were in Owha's territory - not the other way around.

"There were quite a few concerned berth owners because I think some dinghies being chomped and there were some people concerned about their little dogs being eaten maybe.

"However, she has never attacked anybody, she's never shown signs of aggression to anyone. She's just quite a scary-looking beast because she is massive and she's got some teeth on her. But she is beautiful."

Anyone who crosses her path is asked to call 0800 LEOPARD and to keep a distance of at least 20m. Dogs should also be kept on a lead so Owha was not caused any undue stress.

Under the Marine Mammals Protection Act it is an offence to disturb, harass, harm, injure or kill a seal.

Any person charged with one of these offences could face up to two years' imprisonment or a fine of up to $250,000.