Vehicles will be banned from Northland's most expensive beach to protect pedestrians and sand dunes from joyriders taking tractors and SUVs for a spin. 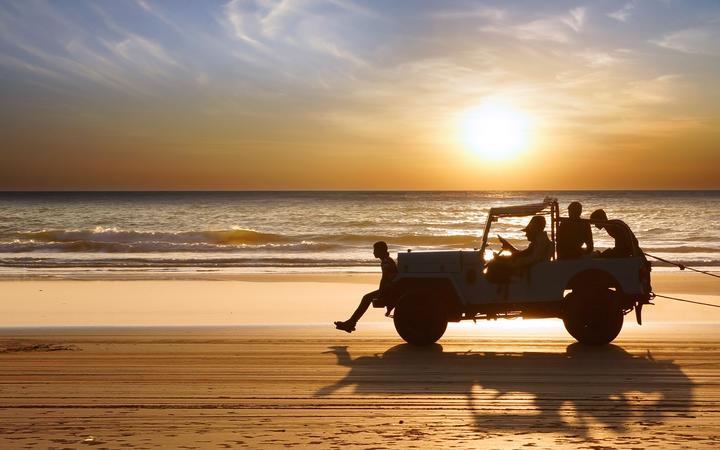 The council's ban will come into force on 18 October in time for Labour Weekend. Photo: 123RF

Whangarei District Council says there has been increasing community concern about pedestrian safety at Langs Beach, a small settlement 90 minutes north of Auckland, where houses fetch millions of dollars.

The council's ban on cars from the main north-west stretch of the beach will come into force on 18 October in time for Labour Weekend when the population swells.

Northland Regional councillor and dune restoration volunteer, Rick Stolwerk, said vehicles had become a problem on the popular beach where bollards had been installed to stop people driving over the dunes.

"Everybody likes the idea of driving on the beach, it just doesn't work on a small beach. Langs Beach is only a kilometre long so it's very difficult to allow access for everybody to enjoy the beach as well."

Mr Stolwerk has lived at Langs Beach for more than three decades and says people drive tractors and four wheel drive vehicles up and down the beach, speeding and doing wheelies.

"They really do churn up the beach and destroy all the vegetation," he said.

"Before we did the dune work it was easy to drive a tractor straight off the road onto the beach. It's not safe to drive your tractor off on those places and a tractor also does a lot of damage to the dunes."

Mr Stolwerk said boaties would still be able to drive onto the south-east end of the beach to launch.

"With the increase in residential housing and the number of people coming up for the weekend there's no way that vehicles, people and other beach activities can work. I think most people will be happy with the fact there's no vehicle access north of the launching area."

Whangarei District Council received 51 submissions on its proposal to ban vehicles on Langs Beach, 43 in support of the restriction and 8 opposing it.

Langs Cove Residents Association wanted the ban to include Sealegs amphibious vehicles, while others were concerned about the safety of children playing on a beach that is treated as a road by some vehicles.

"I have a particular interest in seeing access to and from and on the beach controlled, as we have witnessed some dangerous, reckless, irresponsible behaviour on the beach, most of which is not from local residents, but by visitors to the beach," local resident Noel Davies said in his submission.

In a report proposing the ban, Whangarei District Council said it needed to strike a balance between the safety of beach users and the need to provide a place for small boats to launch. It said restricting vehicle access to the main beach while providing a primary boat launching area would make the beach safer for families.

Driving is allowed on most beaches in Northland but the road rules still apply, and drivers must give way to pedestrians and keep to a 30km/hour speed limit.