Days of cold wind, rain, hail and snow are expected after a cold, southerly blast made landfall down south. 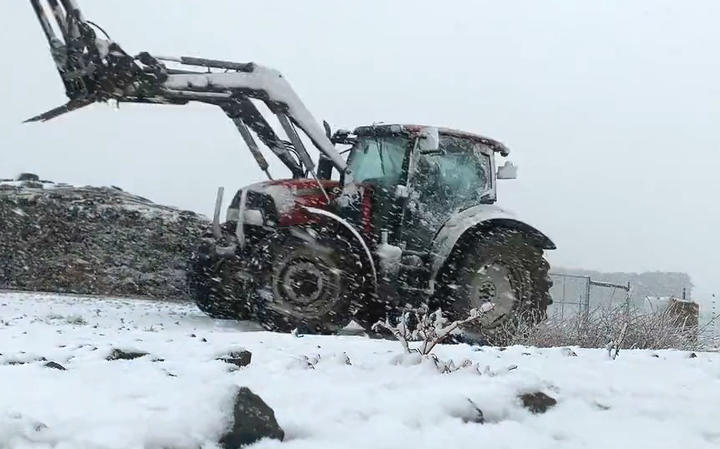 A farm in Southland during a snowstorm affecting the region in early August. Photo: Tangaroa Walker

MetService says several cold fronts will move up the country this week coinciding with the first week of the school holidays.

Cloudy & wet over much of NZ. A front is currently moving eastwards across the North Island, while a series of cold fronts are crossing the South Island from the west. Cooler air has arrived in the far south, evidenced by the open-cell cumulus https://t.co/rcECVuGXOw ^PL pic.twitter.com/WrhVD90yql

Meteorologist Peter Little said snow is expected to fall as low as 300 metres over the lower South Island from this evening, affecting livestock, some alpine passes, and, from tomorrow, the Desert Road.

Mr Little said there's a risk of large hail stones around Nelson and the central North Island tomorrow, and orchardists in Hawke's Bay and Gisborne should watch out.

"The air is coming from way south of New Zealand. We've had some reasonably mild temperatures over the weekend. Napier reached 24 degrees on Sunday afternoon and temperatures are going to drop right back.

"Christchurch also was up to 23 and a half yesterday and that is going to drop back to 11 as a high for tomorrow."

Mr Little said while this weather isn't unusual for spring, holidaymakers should take care to check the roads before they set off.

The NZ Transport Agency expects that SH94 Te Anau to Milford road could be affected by more snow and heavy rain forecast over the next 48 hours.