Firefighters were expected to go back into Skippers Canyon in Central Otago at daylight. 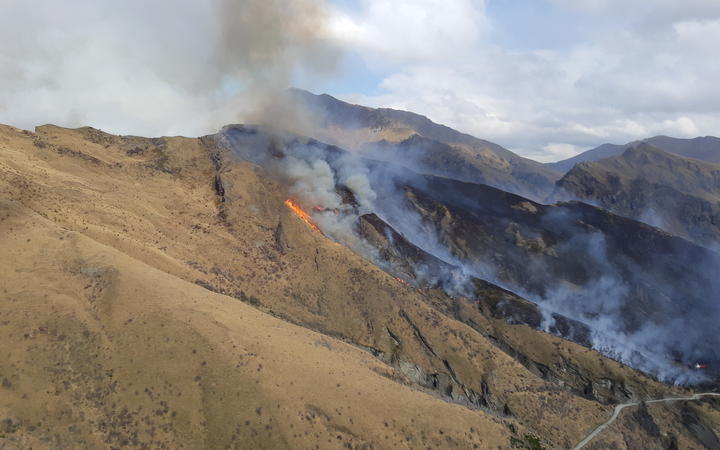 A scrub fire which ignited yesterday from embers of a burn-off on Friday, has destroyed a vehicle and a woodshed along with 140 hectares of vegetation.

It started near Deep Creek shortly before 3pm.

The flames were monitored overnight, but the deputy principal rural fire officer for Central Otago, Mark Mawhinney, said it would be difficult to get a clear look at the extent of the fire until daylight.

Seven fire crews tackled the blaze on the ground, including from Glenorchy, Arrowtown, Luggate, Queenstown and Tarras.

The Skippers Road was closed overnight, however, access was given to residents and emergency services.

Mr Mawhinney said yesterday it was difficult terrain to put out a fire.

"At this stage, we're reasonably confident that we've got it contained," he said. "However, we're not going to be able to have a decent look at the fire line until tomorrow morning.

"So we're a wee bit concerned about what it might do overnight. We can't put any resources onto a fire overnight, it's too dangerous. So If we miss even the smallest spark on the edge of the fire line, we can do nothing with it and it will steadily develop into another substantial fire for us to manage tomorrow morning."

It appeared stray hot embers from the remains of branches being burnt yesterday had started the fire, he said.

"We had someone that lit up a pile of branches on Friday, and that fire in the winds of today has escaped," he said.

"He was burning a pile in an open space. This is the challenge - the pile burnt out but didn't actually go out and for a lot of people It looks like the fire's out.

"But there's a lot of hot embers in there and it only takes a strong wind to get in amongst it, pick up an ember and throw it across the open area and into some dry fields and and then the fire starts."

Mr Mawhinney said a vehicle and a wood shed had been lost in the fire, but nearby properties had been protected so there was no risk to life in the area.