Fire and Emergency New Zealand has confirmed that one of the country's largest plantation forest fires was accidental. 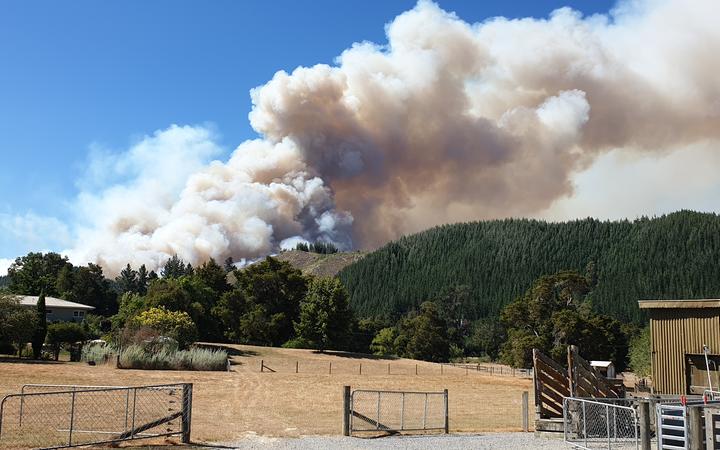 The Pigeon Valley fire was started on 5 February by sparks from an agricultural contractor working in a dry, stony paddock.

The report found that sparks from the discing equipment - from metal on stone or metal on metal contact - ignited dry grass in the paddock.

Strong winds at the time spread the fire quickly, and over the next couple of weeks it burned through 2300 hectares of commercial plantation forest, property and pastures.

A home and a shed were also lost in the fire.

Fire and Emergency principal rural fire officer for Nelson Tasman, Ian Reade, said it was likely that two other fires at the same time, in Atawhai just outside Nelson City and Rabbit Island, were deliberately lit.

He said the Pigeon Valley fire proved that in extreme weather conditions, an every-day rural activity could end up causing widespread damage.

The weather conditions in the area during the six weeks leading up to the fire were characterised by little or no rainfall, high temperatures, and often windy conditions.

Mr Reade said there was was a total fire ban in place at the time, and while the conditions in Nelson and Tasman were extreme, they were not unique.

"Parts of Marlborough, Canterbury, Otago, Bay of Plenty and Northland all had similar fire risk profiles," he said.

Mr Reade said it was likely that the summer conditions would become increasingly common in many parts of New Zealand, particularly in eastern areas.

"There are many simple things people can do to prevent fires starting, from not using machinery which can emit sparks in hot, dry and windy conditions, to ensuring electric fences are not in a position or used where they could spark onto dry vegetation."

He said the fire was fuelled by strong wind, and old forestry tree stumps rotting beneath the ground.

"Much of the forest area where the fire passed through was second and third rotation (forestry).

"Although that doesn't necessarily generate a lot of extra material above the ground it can leave quite a bit of material in the ground in the form of stumps, and where you have dried stumps or organic matter decaying underground, that can cause a prolonged mop up effort."

Mr Reade said home owners could also do things to reduce the risk of fires damaging properties, such as removing nearby material that could be ignited by flying embers. That included leaves in gutters, firewood heaps by the house or timber stored under the house.

He said the most at-risk areas were properties which had large areas of grass, scrub or trees nearby.