A long-running community festival in the Prime Minister's electorate has had the plug pulled to make way for traffic to events in other parts of Auckland on the same day - including a cruise ship's arrival. 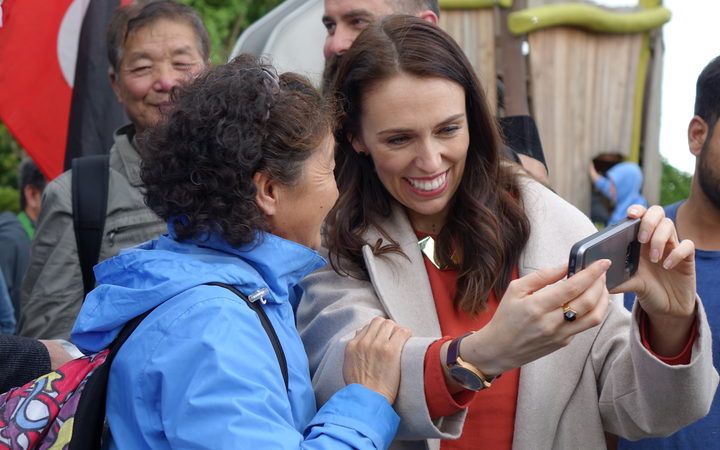 Jacinda Ardern made her first public appearance as prime minister at the Sandringham Street Festival in 2017. Photo: RNZ / Jessie Chiang

Two years ago Jacinda Ardern went for her first public walkabout as the country's new prime minister at the Sandringham Street Festival, taking selfies and mixing with the crowd.

Before Ms Ardern's time, former Labour leader David Shearer would bring along his guitar for a stint on stage.

The festival draws more than 5000 people and has been running for more than 20 years.

But local authorities have vetoed road closures for the annual Sandringham Street Festival on 2 November saying there are too many events across the city.

Sandringham Business Association chairman Karl Petrie is one of the organisers and said he's disappointed it couldn't go ahead as planned.

"Even though we signalled it to council well in advance, less than 60 days out Auckland Transport essentially vetoed the festival by saying that we couldn't have any road closures of any kind whatsoever which really destroys it. We don't want to operate the event in a way that it's a major step backwards," Mr Petrie said.

"Clearly we have been ordered to make way."

In a statement, Auckland Transport said their primary concern with the Sandringham festival is its proximity to Eden Park and Big Boys Toys at ASB Showgrounds.

It said they worked with organisers of two other events planned for that day to reschedule and offered the Sandringham festival organisers alternative dates.

"AT, of course, do support the event taking place on any other day and had spoken with the organisers about the possibility of this."

A list of events provided to RNZ shows about 100,000 people are expected out and about in the city on November the second, starting with a cruise ship's arrival and finishing with the Rugby World Cup final close to midnight.

The Ovation of the Seas is due to dock at 8am with nearly 5000 tourists aboard.

New Zealand Cruise Association chief executive Kevin O'Sullivan said he would not expect the ship's arrival to affect the Sandringham festival but could understand its inclusion in the wider picture of events on that day.

"It can be a large scale event, it's 5000 people arriving on a day and coming into Auckland. Many of whom may be going on tours but quite a few of them may be wanting to sightsee locally as well and I'm sure if some of them knew that the Sandringham festival was on they may well decide to take a bus or travel to have a look."

Mr Petrie said the reasons for the road closures made no sense and road closures in Sandringham would not affect events farther afield.

"Other reasons they brought up was a concert at Mt Smart Stadium and a cruise ship visit on the same day and I struggled to understand how those were relevant, although they did say that they were, and I find that pretty hard to accept," Mr Petrie said.

"It is frustrating, it's disappointing. I hope that in the medium to long term something good comes out of it. I'd hope we don't get blindsided like this again. If council is able to let us know in advance that something is brewing, we can make arrangements."

Mr Petrie said the festival was held after Labour weekend every year, and it was too short notice for organisers to change plans.

"We're still puzzling over it. Sure you have 5000 people on a cruise ship but not many of them will find their way to Sandringham Rd and it's not at all close to Alexandra Park. It doesn't make a lot of sense to us."

He's disappointed the bid for road closures has been refused, meaning the festival cannot go ahead.