Apprenticeships and trade certificates could soon be elevated to the same official status as university diplomas and degrees, industry training organisations say. 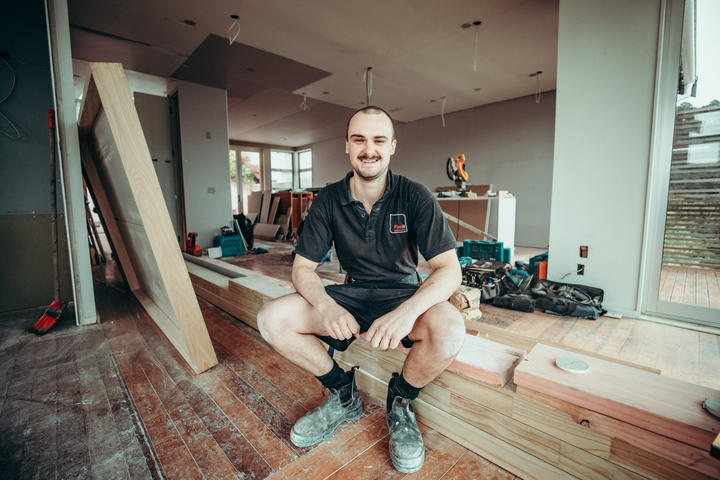 Tom Halsall who is a building apprentice with a university degree said the apprenticeship was just as difficult as a degree. Photo: RNZ / Dom Thomas

They say the qualifications are just as demanding as academic study, but are officially recognised as much lower-level qualifications and that is out of step with other countries.

The review is considering the descriptions of what is required at each of the 10 qualification levels and once that is completed, probably next year, industry training organisations are likely to rewrite some of their qualifications and ask for them to be listed at a higher level.

The chief executive of the Building and Construction Industry Training Organisation, Warwick Quinn, said trades qualifications should be treated fairly.

"If you're doing a trade qualification, it's a certificate so it sits at level 4 irrespective of how complicated or significantly difficult it is. Now under what we're proposing, if it's a difficult and a long qualification that requires a lot of research, a lot of cognitive thinking etc., it should be listed higher on the framework equal to whatever qualification an academic pathway might have that has a similar output," he said.

Mr Quinn said applying that approach should result in a level 4 building qualification being bumped up to the same level as a diploma or even a degree.

"We would see it somewhere round level 6, maybe 7 if you're doing an advanced trade or the supervisor programme that's attached to it because the outputs are very similar to the types of outputs you'd expect from an entry-level degree," he said.

The chief executive of the industry training organisation Competenz, Fiona Kingsford, said most of its level 4 trade certificates should really be at level 5 or 6 of the Qualifications Framework.

"We cover sectors from fire protection to mechanical engineering, refrigeration engineers all of which involve significant decision-making and supervisory skills, making complex decisions that after four years of study puts them much higher than a level four on the framework."

She said raising the qualifications' levels would happen in another year or two and would have a big impact on their popularity.

"There has always been a perception out there around university being a better career path for young people than what apprenticeships are, but the fact of the matter is these people come out highly qualified and competent and having their skills recognised at the appropriate levels means that they are appropriately recognised alongside university graduates, not as a plan B."

He told RNZ the apprenticeship was just as difficult as his university degree.

"I thought it was going to be easier than it actually is," he said.

"First year apprenticeship you're not really doing anything too difficult, but it's a similar story with university so I'd put it on par to be honest."

Mr Halsall said an apprenticeship should result in a qualification that was at least at level 6 on the Qualifications Framework.

A Qualifications Authority consultation document said New Zealand's vocational qualifications tended to be at lower levels than other countries such as Germany, which placed its master craftsman qualification at the same level as its bachelor degrees.

The head of Otago Polytechnic's College of Engineering, Construction and Living Sciences, Richard Nyhof, said the degree already existed, but it had never been offered in this country as an apprenticeship.

Mr Nyhof said if the degree was successful, it was likely other disciplines would start to offer degrees through an apprenticeship model.