A plume of contaminants under Ohakea air base in Manawatu will keep spreading in the water for up to 125 years. 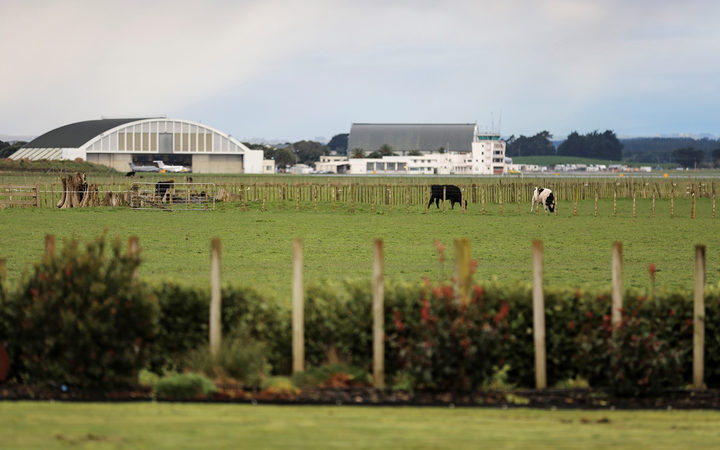 The Ohakea air base in the Manawatu. Photo: RNZ / Richard Tindiller

Meanwhile, in the Waitematā Harbour, the same compounds have been found far away from Defence Force bases that are ground zero for firefighting foam contamination.

New reports paid for by the Defence Force summarise the findings from years of investigations at Ohakea, around the old Whenuapai air base and focused on Devonport Naval base's firefighting training centre on Ngataringa Bay.

The pervasiveness of PFAS (per- and poly-fluoroalkyl substances), also dubbed "forever compounds" because they last thousands of years, stands out starkly.

"The worst-case scenario is that it will be around for more than 125 years," the Ohakea report said of the plume.

The reports also underscore the big gaps in knowledge, such as just how long drinking water bores at Ohakea will be compromised, or just what the impacts are on fish or shorebirds that feed off Devonport.

"With a complete reluctance to test further, I cannot see Defence doing much more than defend their line that all is okay," Auckand's North Shore ward councillor Chris Darby said.

At Ohakea, the plume is spreading at a rate of 50-100 metres per year in groundwater under farms south of the air base, and is expected to eventually cover double the 1500 hectares or so it covers now, but not get past the Makowhai Stream and the Rangitikei River.

"It's not tidying up a waterway in a year, or a generation, it's going to take several generations. There's still contamination on base, and it's still spreading."

The Ministry for the Environment was in charge of an all-government response that is now winding down, with the job to monitor or perhaps clean up PFAS transferred mostly to regional councils.

"Health officials say there is no acute health risk, but a precautionary approach is being taken because the long term effects are uncertain," the ministry said in a statement.

At Ohakea, a quarter of the tested bores off base recorded PFAS levels at above drinking water guidelines, and more and more shallow bores will be contaminated as the chemicals spread.

In Auckland, there are traces 15 kilometres away at Hellyers Creek in Birkenhead and 40km away, north of Whangaparoa.

The Defence Force was keen to point out that PFAS came from many sources.

"In an international context, the Waitematā Harbour as - an urban harbour with multiple sources of PFAS - doesn't seem to be particularly affected," NZDF said.

However, the amount of one banned type of PFAS, called PFOS, in sediment at the Devonport firefighting base outfall was "the highest recorded amongst the limited number of national and international studies reviewed", the consultant's report said.

The report makes clear levels generally are highest near the defence bases.

On the environmental front, the reports were largely inconclusive.

All five sample sites at Whenuapai were above the ecosystem protection guidelines.

But very little testing of fish has been done.

At Ohakea, most farm products contained PFAS at under human health trigger levels, apart from eggs.

The tests have looked at only a few of the PFAS compounds out of typically 600 or so that occurred in the old foams. All up there are 2000-3000 such manmade compounds.

"It appears very defensive to me," councillor Darby said in reference to the Defence reports.

At Ohakea, locals now rely on bottled water and have waited over a year for a start on a piped water scheme.

Mr Russell said the reports showed they needed a water scheme and needed it quickly.

Environment Minister David Parker turned RNZ's request for an update on the scheme into an OIA that is not due back until next week.

The PFAS response is also taking a long time in Taranaki.

There, the regional council is still awaiting the results of investigations by the company that runs a contaminated firefighting site, Wood Group.

Two streams beside the site are still off limits for taking eel or fish, 14 months after RNZ revealed they were contaminated.