An Auckland restaurant owner feels helpless and ignored by Immigration New Zealand as he tries to sort out visas problems for his foreign workers. 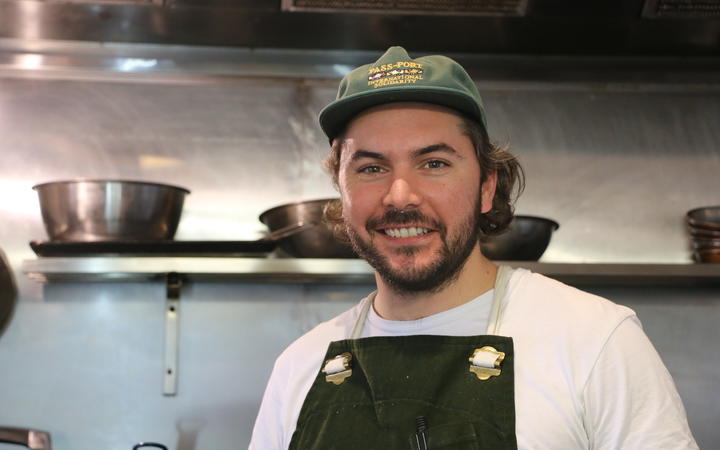 Sam Bratton has been running the restaurant Vondel in Devonport since 2017. Photo: RNZ / Jessie Chiang

Sam Bratton has been running the restaurant Vondel in Devonport since 2017 and said he was extremely frustrated with trying to deal with officials.

The trouble began when one of Mr Bratton's employees from Wales had his visa application, as a restaurant manger, declined early this year.

Immigration questioned whether Mr Bratton had made genuine attempts to recruit New Zealand residents because he had advertised the job required eight years experience when the industry's recommendation was just three years.

An appeal was filed but the restaurant owner says there were next to no updates - his manager had to leave New Zealand and he was stuck in limbo.

That appeal was also declined in July.

"Immigration New Zealand consider three years sufficient experience to apparently do his job which ... to me sounds like someone who's never done the job," he said.

"I have half a million dollars riding on this."

Sam Bratton, who has been in and out of the hospitality industry for 15 years, said three years experience is not enough for restaurants aiming to have fine dining.

But officials said while an employer can specify a work experience requirement above the minimum standard, immigration must consider whether the employer has advertised the work in such a way that no New Zealanders are likely to apply.

An hour after the appeal decision came through, Mr Bratton said his head chef, Keshan, handed in his resignation because he needed to move out of Auckland to get the necessary points for his residency application.

Migrant workers can get extra points that count towards residency if they live and work outside major centres.

For Mr Bratton, it all came to a head when his sous chef was stopped from coming back into the country last month.

"He was on his way back from Italy, stopped in at Bali and they stopped him from getting on the plane," he said.

"This was all kind of like the 11th hour so he was supposed to arrive on Monday and Keshan had his last day on Wednesday."

Trying to find out anything from Immigration New Zealand was near impossible, he said.

Mr Bratton only found out later on that his sous chef had not disclosed previous problems to authorities.

The owner said his dealings with Immigration had left a bitter taste.

"It's so frustrating because some of it is just such a simple answer and yet there's an utter refusal to have any kind of discretional policy. It's all black and white, to the book, and just like this is how it is," he said.

Immigration New Zealand told RNZ while it accepted Mr Bratton was frustrated with the process, without privacy waivers from the individual workers involved it was unable to give specific details about their cases and visa applications.

Hospitality New Zealand said it was no secret that restaurant owners rely heavily on workers from overseas.

Its policy and advocacy manager, Nadine Mehlhopt, said there just were not enough New Zealanders who want to get into hospitality and being told to hire locals can be a problem.

Ms Mehlhopt said that can slow down productivity, put customers off and ultimately affect revenue.

Mr Bratton has been working seven days a week, opening his restaurant early in the morning and closing late in the evening, to cover for the lack of staff.

And he had a message for Immigration New Zealand.

"Have some emotion in what you're doing," he said.