New research on deaths related to synthetic cannabis shows there are sharp geographic differences in the specific compounds causing fatalities.

A two-year research project by the Crown Research Institute, ESR, has identified four different deadly synthetic cannabinoids in coroners' reports, and some cases where multiple substances are found.

Most of the synthetic cannabis-related deaths occurred in the upper half of the North Island.

Over the two years to July 2019, AMB-FUBINACA was involved 80 percent of the 90 deaths linked with the compounds, including the bulk of the 68 cases in the upper North Island. It's recently been made a Class A drug, the highest classification.

However further south, three other compounds have been detected in greater proportions.

In the 14 cases in the lower half of the North Island, 5F-ADB was the most common, followed by AMB-FUBINANCA, and then a combination of two, and a small number of cases where 5F-MDMB-PICA was detected. 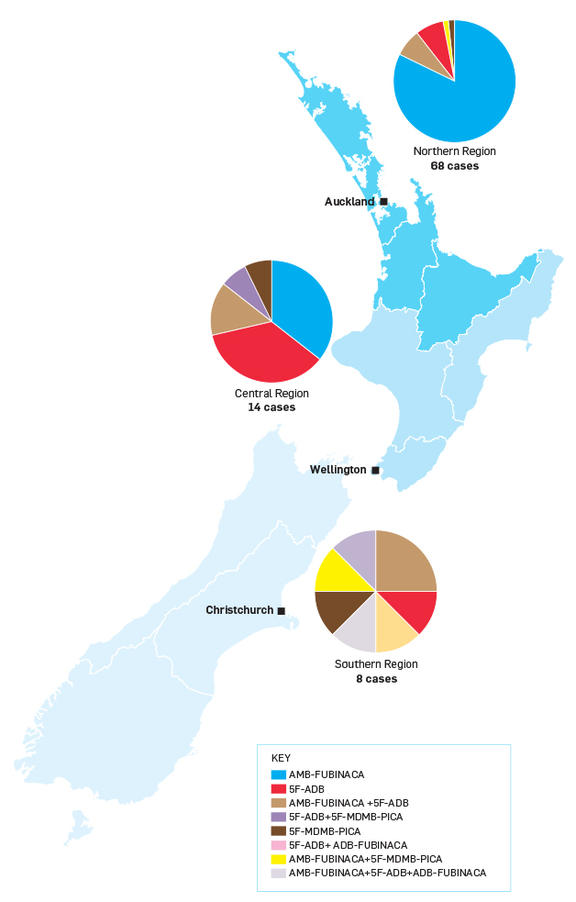 In the eight South Island cases, a range of all three were found, and a slightly different type, ADB-FUBINACA.

ESR forensic toxicology manager Dr Mary Jane McCarthy said they worked with the Police, Customs and the Ministry of Health on the research.

"Our data was used to inform and assist health and enforcement agencies to tackle the harm being caused by these dangerous drugs."

Dr McCarthy said ESR's research is part of a global response to the synthetic substance "crisis". She said ESR is a contributor to the United Nations Office on Drugs and Crime (UNDOC) and receives regular updates on new substances coming into the market.

"Being able to share our data within New Zealand and internationally is helping us predict, prevent and protect New Zealand communities," she said.

Yesterday, a coroner released provisional figures which found 24 people had died directly as a result of using synthetic cannabis since June 2017, and a further 50 cases where it appeared to have been responsible.

Chief Coroner Judge Deborah Marshall said there were other cases where synthetic cannabis contributed to a fatality, but coroners ruled it was not ultimately the cause of death.