This morning media were given a final chance to walk through Christchurch's Lancaster Park before it is completely demolished. 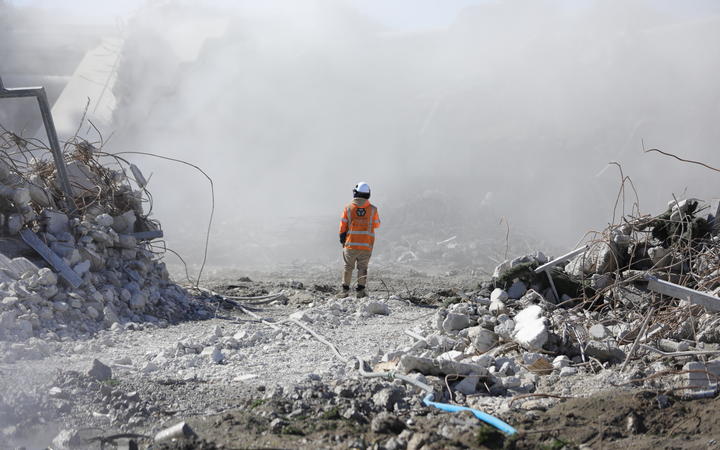 The Lancaster Park demolition is entering its final stage as large concrete pillars are being removed. Photo: RNZ / Simon Rogers

The park's grandstands were badly damaged in the 2011 earthquake, and in 2017 $12 million was set aside for it be pulled down. The Hadlee and Tui Stand have already been removed, and work is continuing to deconstruct the Paul Kelly Stand and Deans Stand by December.

At the park today, the hammering sound of demolition stands in stark contrast to the roars of crowds during Lancaster Park's glory days.

The 130-year-old ground has been the stage for All Blacks matches, rock star performances and even world records.

Fifty-seven-years ago, Peter Snell set a new world's best for the 800m in front of a capacity crowd on a grass track.

Walking across the field where legends have once played, media crews had to be careful not to trip over steel piping that juttered out of the ground.

Christchurch City Council project director Lee Butcher, who is overseeing the demolition, said he expected the project to be completed by December.

"We plan to have the building flat by end of the year."

Mr Butcher said the demolition was expected to take 10 to 12 months. 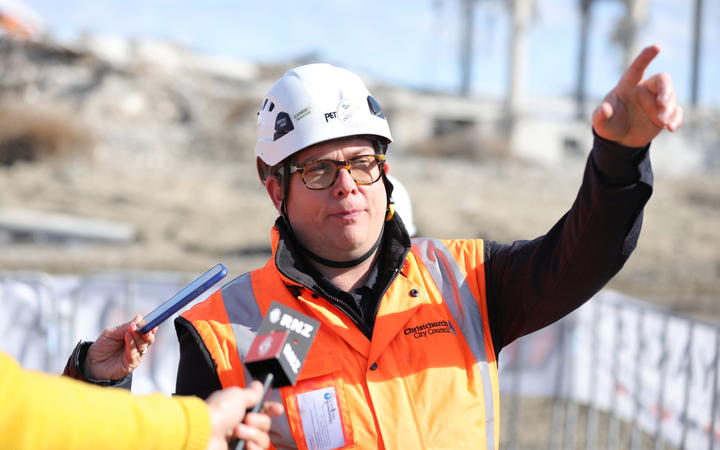 Demolition crews chipped away at the remaining skeleton of the Deans Stand, which was built in 2010.

Three diggers worked in harmony to take down a six-story concrete structure, until finally, the structure gracefully toppled over.

Mr Butcher said over 35,000 tonnes of concrete and steel had been removed from the site.

He was pleased to say that 98 percent of the demolition material would be recycled.

"We've got a development in Rangiora that we're taking [the concrete] to and that's going to be used for ground improvement there. So that's a good win for us. We got a use for it.

He said the steel would be used a scrap and added that waste from the construction was between 1.7 percent and 1.8 percent, just shy of their self imposed 2 percent threshold. 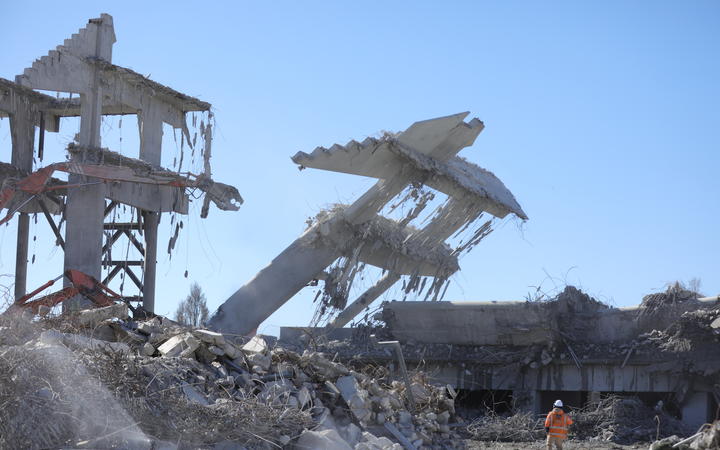 With the site at Lancaster Park expected to be stripped clear by January of next year, attention will turn to what's next for the ground.

The council's head of parks, Andrew Rutledge, said the council wanted to open the park up to public as soon as possible.

"We will develop this place in phases. The most important thing is to get people back in here and that's most likely going to be in the form of local and community sport.

"Then we'll develop the rest of the park as budgets allow over the next decade."

Mr Rutledge said many people were sad to see the stadium go, but the new development would celebrate the legacy of the ground.

"It's hard to put [the loss of the stadium] into words. Through the new development we will reflect that. We will put a walkway train where people can reflect on some of the history of the park."

Christchurch City Council will convene to consider a proposed spatial plan for the ground at a public meeting on Thursday.

Residents will have a month to consult on how they want their beloved sports ground to look like in the future.