Flooding in the Coromandel is expected to recede overnight after a "thorough drenching" over the last 24 hours, with floodwater and land slips closing roads around the peninsula and damaging homes. 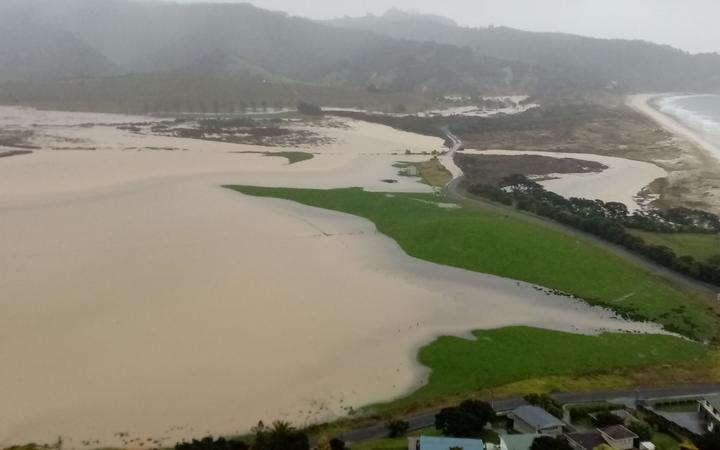 Flooding in Otama, in the Coromandel, on 10 September. Photo: Supplied / Thames-Coromandel District Council

More than 150 millimetres of rain had fallen at sea level since about 4pm on Monday, and 260mm in the high-altitude Pinnacles. Flooding and slips closed a number of parts of State Highway 25 and local roads, as well as flooding private farms and some houses.

Only one portion of the state highway now remains closed - between Whitianga and Kuaotunu, about halfway up the east coast.

Thames-Coromandel Civil Defence controller Garry Towler said they wouldn't know how bad flood damage will be until daylight tomorrow, but all things considered, the area had come out relatively unscathed.

"No major injuries, we've had a couple of self-evacuations, but there's a lot of localised flooding," he said. "But we won't know [the extent] until it starts to recede and we get full light tomorrow.

"In terms of our infrastructure - our stormwater, wastewater and drinking water - that's all held together very well.

"We've stuck this one out pretty well."

He said rain was still coming down on Tuesday afternoon, but it was starting to clear and remaining floodwaters should drain overnight. Mr Towler said people living between Whitianga and Kuaotunu would have to stay put tonight as the road remained closed, but they were used to that.

"This is business as usual for us. We get a huge amount of rain - it floods and we get isolated, but it drains very quickly."

He said major slips around Kuaotunu had affected a lot of people, including people isolated at Otama and Opito Bays until tomorrow.

"We're expecting by 9 o'clock tonight that it'll be reasonably calm, and that'll allow the contractors to get stuck in and finish it off first thing tomorrow morning."

He urged non-essential travel to be put off on the eastern seaboard, even if a road was open, due to the risk of more slips or waters rising.

A resident from Kuaotunu said more than a dozen homes had been damaged during the weather cycle.

More information can be found on the Thames-Coromandel District Council website.

"As the weather eases, we encourage our residents to check in on their neighbours and make sure they are OK. If you have any concerns about friends or relatives, phone us on 07 868 0200.

"The Emergency Operations Centre (07 868 0200) will remain open until this evening, which will focus on monitoring our isolated northern communities, some of which have lost internet connection."