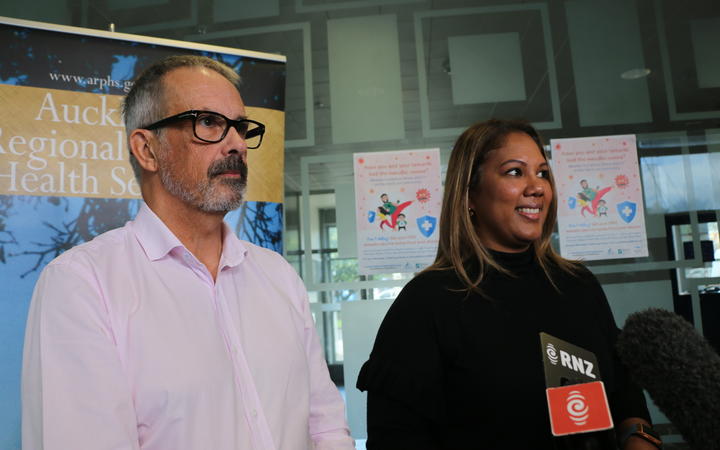 Auckland Regional Public Health Service held a news conference this afternoon to address the outbreak, announcing that 19 new cases of the disease had been recorded. Measles has been increasing by about that number each day.

The number of measles cases in Auckland is now up to 778 from 759 yesterday. There have been 937 reported nationwide.

Worst affected have been children younger than five and those aged between 15 and 29.

"The incline of the epidemic curve is still steeply upwards.

"We haven't seen any sign of plateau at this stage. When we reach the peak we can't predict."

He said although it was not the worst outbreak of measles in New Zealand - there was a 1997 epidemic that reached into the thousands - it had "truly exceeded the most recent significant event" of 2014.

"When you've got measles, you're infectious before you even realise it."

ARPHS was not advising people in Auckland to avoid public gatherings, however Dr Rainger said those who had or suspected they had measles should isolate themselves.

"The risk to people out and about in Auckland of getting measles is actually quite small. The problem is that when there is a case of measles, it spreads quite easily.

"When you've got measles, you're infectious before you even realise it."

Dr Rainger said one person with the measles could infect on average about 15 other people, compared to the flu where a single person could only infect about two people.

Counties Manukau District Health Board integration manager for child youth maternity Carmel Ellis said there was a clear way in which to gain resistace to the disease.

"We really need to get as many immunisations as we can," she said.

'Concerned about those in the region who are not vaccinated'

Free vaccinations are being offered at three locations in South Auckland from today - at the Clendon Shopping Centre in Manurewa, Middlemore Hospital, and at the Free Church of Tonga in Māngere.

There have been only 125 immunisations so far.

Dr Rainger said anyone younger than 50 who was not sure if they were vaccinated should do so.

"We are concerned about those in the region who are not vaccinated.

"And of this group it is the children and those who have weakened immune systems who are most at risk of complications from measles.

"At this stage of the outbreak our objectives are to limit the spread…to protect the most vulnerable people, and to promote the uptake of vaccination."

The outbreak has caused the cancellation of a high school rugby league championship this weekend and health officials fear that herd immunity may already be lost.

Over 50 schools in the Auckland region have had measles this year.

ARPHS is working with the Ministry of Education to help schools manage cases.