Six women prisoners have emerged victorious after overcoming their addictions through a drug treatment programme at Arohata Prison. 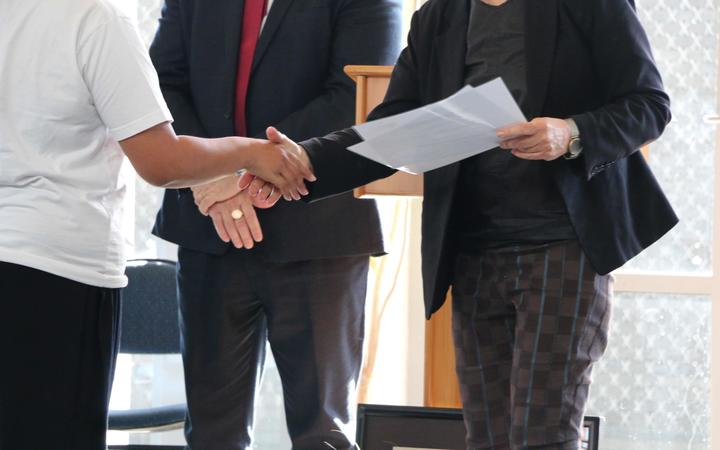 The programme at the female-only prison in Tawa is one of 11 places where the government is expanding drug and alcohol treatment programmes.

The government will also fund five more drug and alcohol programmes as part of its $128.3 million investment in drug, alcohol and mental health treatment programmes.

It was a proud moment for all six of the prisoners, but especially for one wahine who said it is the first time she had ever graduated.

Another choked up with tears as she thanked the staff and volunteers that had helped her overcome her addiction.

She told RNZ that as part of the 12-week programme, she'd been forced to face all the hurt and pain she had caused others.

"There's a selfish mode you go into when you're offending and then you have to deal with the guilt and the shame afterwards and so coming here and doing this programme for me was like a mountain to climb and forgiveness was at the top of it."

She had come away from the course better able to handle situations, using strategies like weighing things up and considering the consequences.

As part of the 12-week programme, the women are taught how to make quilts, producing at least one each by the end of the course.

There are also six sessions with Toastmasters to train the women in public speaking to help build their confidence.

And while this graduate said she was completely freaked out by public speaking to begin with, she now wants to use the new found skill for good.

"I do think that with the journey I have gone on that being able to talk to others might save others from going down the same roads of hurt and pain, so I am trying to find my voice."

She has also managed to replace her addictions, with what she calls an 'addiction to knowledge", having already completed courses in hospitality, business, entrepreneurship and leadership.

"I don't fear getting out and not being able to get employment anywhere because I know that I can further my skills when I get out and I'm not scared to develop them anymore... I'm so glad that I found education because it is going to be the one thing that changes the rest of my life."

Gill Hood from Care NZ, which facilitates the drug treatment programme, said it is incredible to see the journey the women go on from the beginning to the end.

"When these women came in they were very withdrawn ... and quite reserved and sat over in the corner and not that engaged and to come back 12-weeks later and see them stand-up in front of quite a large group of people and talk about what they've got out of the programme, it's just amazing."

Eighty-seven percent of prisoners have experienced problems with alcohol and drugs over their lifetime, and last year, the three-month drug treatment units were shown to reduce reconviction by almost 8 percent.

Corrections Minister Kelvin Davis was at Arohata to congratulate the women.

He said that on top of the over 700 people who go through the drug and alcohol treatment programmes every year, the additional government funding would provide another 200 people with access to this support.

Another seven women at Arohata Prison, who were watching on and taking part in the waiata, are already halfway through the course.