Six prisoners hoping to stay off drugs outside of prison have just graduated from Arohata Prison's drug treatment unit in Wellington. 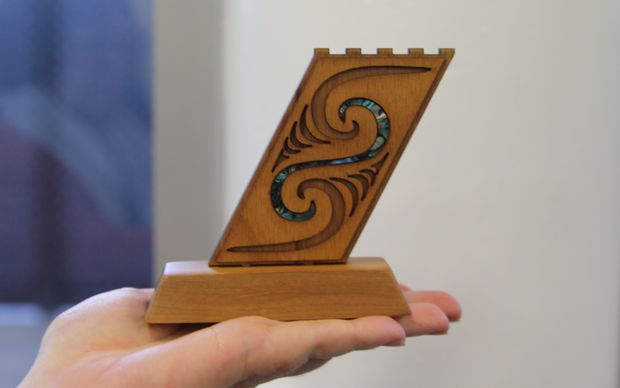 One of the inmates at Arohata Prison holds an award she received from the drug treatment unit. Photo: RNZ / Maja Burry

The women are this year's first graduates from the six month programme. More than 450 female inmates have been through the programme since it began in 1997.

One of those graduating said it was a significant milestone in her rehabilitation from a life of addiction.

"I've struggled with addiction for a long time and this programme has made me really look at myself and what it is that led me to use and kept me stuck in that pattern of using. I've learnt so many tools in here to help challenge that and to keep me on the right path from now on."

For some inmates it was the first time they had seen their families since they transferred to Arohata, which is the only women's prison to offer the programme.

Another graduate said the drug treatment unit had given her the chance to be a better mother.

"This is a life-changing course you know, I've learnt so much from this course that I never thought possible I never knew I had all these character defects, that's really been a big change for me."

Prison Director Chris Burns said up to 20 women could be moving through the programme at any time.

He said it took a therapeutic approach to rehabilitation by supporting prisoners to address their alcohol and drug issues.

"They've had to have a really good, hard, honest look at themselves and realise that actually the road they were travelling was definitely not the direction they wanted to be heading in and this programme has given them the opportunity to re-channel really and to redirect their lives."

Mr Burns said there was strict criteria for entry to the programme and that prisoners must acknowledge that they have an addiction and be motivated to make a change in their lives.

But he said some could be sceptical at first.

"Anecdotally occasionally they will say 'oh, actually I chose to go on the programme so that I could tick a box and it would look good on my parole board report', however after they've been here for a month or two they realised that the programme has some real benefits and some real value."

Corrections said 87 per cent of prisoners had a lifetime diagnosis of a substance use disorder, and it was a factor in more than half of all crimes in New Zealand.

There are nine specialist Drug Treatment Units in prisons around the country, eight of which are operated by CareNZ.

"The women who come in to the programme are often really unaware of a lot of issues that have led to their alcohol and drug use, so it's a real eye opener for them and I think once they start on the programme it really is the start of a recovery journey."

But Ms Hood said this graduation signalled that start of a much harder chapter in the offenders' lives.

The women would now have to apply what they had learnt to life outside of prison, she said.