A hard-hitting review has revealed deep divisions, including a loss of faith and trust, by nurses in their union during contentious pay talks last year. 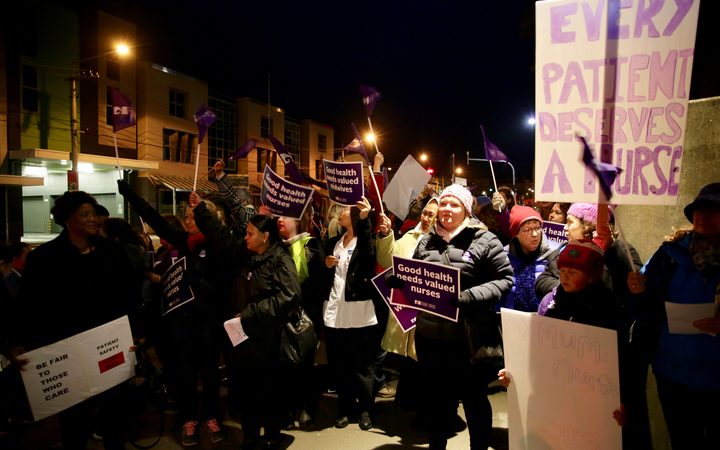 The independent review, released today, was carried out for the New Zealand Nurses Organisation (NZNO) by a former president of the Council of Trade Unions, Ross Wilson.

It looked into pay talks that began in May 2017 and ended last August [2018] with a pay deal, following a nationwide strike on 12 July last year.

Bargaining was long and complex and marked by the use of social media and new Facebook pages and groups that frequently criticised the actions of union leadership.

Mr Wilson said in the report the whole process was "very stressful and difficult".

"Everyone believed what they were doing was best, but the pressure on the organisation and individuals at times was intense and overwhelming.

"This sort of pressure reveals weaknesses in planning, structures, organisation, resourcing and policies and, with hindsight, there were many."

Recommendations include that the union invest in a reconciliation and development process, independently managed and facilitated, "to discuss and hopefully resolve the many issues which emerged..."

Bargaining also coincided with rising dissatisfaction among nurses about a lack of progress on improved staffing in public hospitals over a decade. Mr Wilson said this, along with concerns about progress over the Care Capacity Demand Management, or CCDM method of improving staffing, "has resulted in worryingly high level of membership disillusionment and scepticism".

That fed into social media, which Mr Wilson said was "very significant" during bargaining and included the emergence of new Facebook pages and groups. It caught the union unawares and at first it was unsure how to respond. "The first management response was [redacted] not to respond to the sometimes inaccurate information which was being posted".

Dissatisfaction among nurses with their union "led to their engagement on social media". For their part, management "raise the concern that the social media was led by political activists, some from outside the union, and saw it as 'interference in our bargaining' and an attempt to influence the ballots."

Mr Wilson added that the scale of social media activity and the associated high public media profile of some participants, "was unprecedented in union negotiations in New Zealand."

But Mr Wilson said communications by the union were "light" and "inadequate to meet the challenges". "Delegates spoke of their desire to see their leaders publicly articulating their concerns and ensuring, through paid television and other advertising if necessary, that the general public understood and supported them".

Union organisers also had problems. Mr Wilson said: "They were working in an environment of distrust, frustration and sometimes anger and aggression which felt increasingly unsafe. This was made more difficult by the requirement that members be barred from voting if they arrived late and didn't experience the complete presentation. Many members just wanted to vote and go, and frequently asked why there wasn't online voting."

Research by the union in preparation for bargaining also was "quite limited". It was "inadequate for such a major negotiation on behalf of a large proportion of the NZNO membership". Mr Wilson said he had heard research was "done in haste, and contained a number of errors including out-of-date data."