Worksafe says it's pure luck no one was killed when a giant tree toppled down at a central Auckland daycare centre, injuring four children and a teacher. 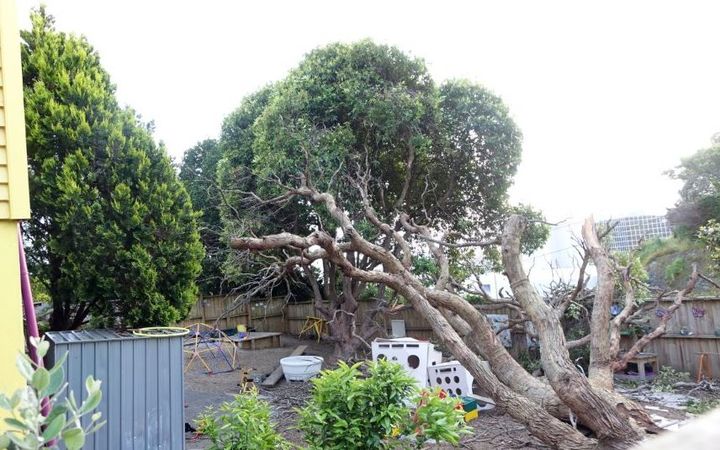 The tree fell over at Discoveries Educare Centre in the suburb of Epsom in November 2016.

The daycare centre was prosecuted after an investigation found the tree had been dead for more than a year.

Discoveries Educare Centre was fined $172,000 and ordered to pay $46,000 in reparation at the Auckland District Court today.

Worksafe northern investigations manager Danielle Henry said it was a "potentially catastrophic". She added it was "pure luck that no one was killed".

"Our investigation found that the tree had been dead for more than a year before it fell. The dead tree should have been identified and appropriate steps should have been taken to address this risk, such as removing the tree from the playground."

Worksafe said the Discoveries Educare Limited failed to monitor and manage the condition of the tree.

"Discoveries Educare Limited and Heng Tong Investments Limited both had a duty of care they failed to meet," Ms Henry said.

"This was a big, old tree and a very obvious risk to those on the premises. This incident shows in near-catastrophic detail just how important it is for businesses to assess all risks their operations pose to workers and others."

Heng Tong Investment, which leased the property to Discoveries Educare, was also fined over the incident.

The centre said it had apologised to the families of four children injured and changed its safety procedures. It has also reviewed all trees at its sites.

Mr Singh said: "Our staff had noticed that the tree had stopped producing leaves. However, we did not appreciate that this presented a risk of harm, and that the tree could potentially fall over at any time. That was our failing, as we were responsible for ensuring that trees on the property did not represent a risk to staff, students or visitors.

"We recognise that we should have taken expert advice on first becoming aware of the deteriorating condition of the tree.

"We apologise to the children and their families for what they went through and we will share the material we have developed with others to help prevent similar accidents in future."