Two children suffered head injuries when a tree fell on them at an Auckland childcare centre, the centre's owner says.

Four children were injured when the large tree fell at Discoveries Educare, on Gillies Ave in Epsom, about 1.40pm.

Two of the children were in a serious condition in Starship Hospital and the other two were treated for minor cuts.

Discoveries Educare childcare chain owner Ajit Singh has been at the hospital checking on the children.

"Two are still in the hospital, they are stable but they are being monitored because they got some head injuries ... A little bit of cuts in the front and maybe in the side areas." 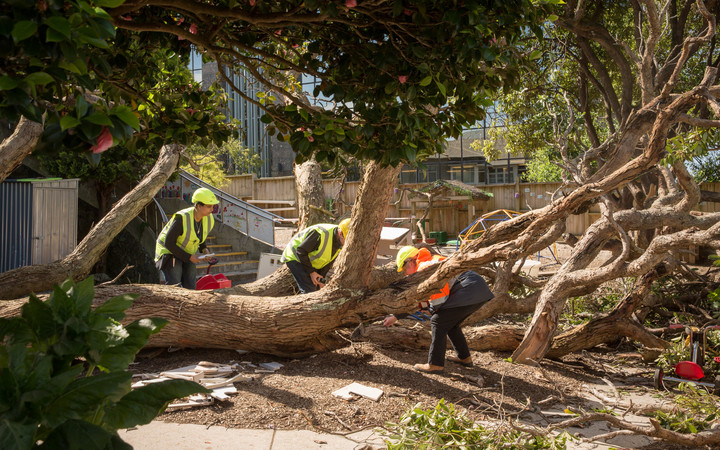 He said the tree was declared safe by an arborist, and all the records have been given to WorkSafe.

The Ministry of Education said it would work with the daycare centre to ensure debris was cleared away and any hazards were made safe.

No concerns were raised about the safety of the tree before it fell, it said.

A support team was providing help to staff and families, the ministry added.

Earlier, St John Ambulance spokesperson Simon Barnett said it transported three children to Starship Hospital, and another was sent separately to the hospital.

Mr Barnett said one child was initially assessed as critically injured, one was seriously injured, one had moderate injuries and the fourth had minor injuries.

There were about 25 children at the centre at the time the tree fell, he said.

A woman at the business next door, which ran the daycare, said it had all the trees on the property checked about three years ago and was told the tree that fell was fine at the time.

Another woman, Afsheen Kabir, who has a four-year-old daughter at the centre, said her child was fine but she was feeling for the parents of the injured children.

WorkSafe said two inspectors were at the site and making initial enquiries.

Epsom MP David Seymour, whose electorate office was next door to the centre, said it was "very distressing" to hear what had happened.

"I see these children and their parents regularly," he said.

"My thoughts are with these toddlers and their families."