Helen Clark has sounded a warning over the country's growing tourism industry and what it means for climate change. 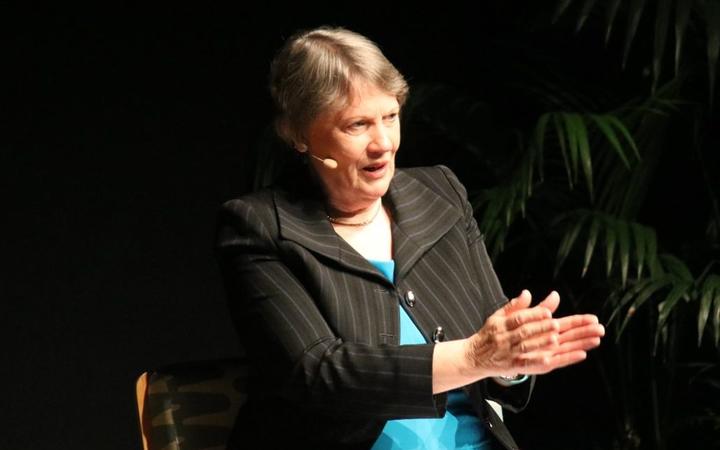 Hundreds of people packed Christchurch Town Hall last night to hear from Ms Clark, who brings eight years experience from the UN, including close dealings with the sustainability development goals.

Fielding tough questions from young leaders, the former PM and United Nations Development Programme Administrator said the country needed to think about whether it was living up to its "100% Pure" tourism slogan, as the focus shifts to how products are produced and their cost to the environment.

After describing climate change as "apocalyptic" last year, her tone was a little more optimistic when meeting with people like 12-year-old School Strike for Climate organiser Lucy Gray.

"I think what always helps is knowing that these are shared challenges... a lot of people are working for solutions - and there are solutions," Ms Clark said.

"We have to be incredibly positive."

Leading the conversation was University of Canterbury Associate Professor, Dr Bronwyn Hayward, who asked Ms Clark how she saw New Zealand positioned as an economy at the moment, with its emphasis on long-haul tourism.

"There's quite a movement against air travel and high-value markets in Europe ... people are questioning whether they should fly 12,000 miles, so we'd better have a good story," Ms Clark said.

"Air New Zealand has long recognised this and has a sustainable development strategy, was the first airline to do a long haul flight with biofuel."

Ms Clark said New Zealand could have a successful climate change agenda if it harnessed the right technologies and looked to the examples of other developed countries.

"For a good honest effort you can't fault the way that Germany is approaching this," she said.

"There are good examples out there from developed countries like ours that we could, you know, learn from and adapt from."

Ms Clark said young leaders were increasingly making waves on topics like sustainability. She was quizzed by Sati Ravichandiren of the Student Volunteer Army on inspiring change amid the anxiety and the negatives of climate crisis.

He asked how to get young people and students caring and immediately acting on sustainability development goals.

Ms Clark also touched on good leadership and the gaps in gender equality, with a quick swipe at Simon Bridges' comments of last month.

"If you think for two minutes of some of the criticism [Prime Minister Jacinda Ardern] gets, it would not be levelled at a man. In the first place, would a male PM be juggling with a small baby and putting in every hour given to work? To see Jacinda labelled a 'part-time PM' when she probably works 25 hours a day, is ridiculous," she said.