About 100 environmental protesters attempted to stick 'eviction notices' on the Majestic Centre in Wellington this morning, where the Austrian oil company OMV is based. 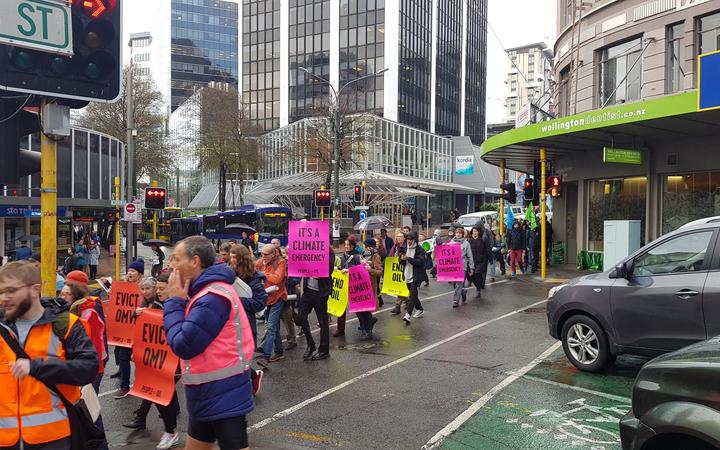 The action, led by Greenpeace, followed a stunt three weeks ago where two protesters scaled the building to hang a large banner reading 'It's a climate emergency'.

This morning security guards at the building ripped down the notices that protesters were hanging.

But Steve Abels from Greenpeace said they would keep the pressure on.

"We've had good success in the past with the departure of Chevron, Shell and others, and so we know that this sort of pressure on these companies makes being in this part of the world an unattractive prospect."

Mr Abels said OMV was one of 100 companies responsible for 70 percent of the world's greenhouse gas emissions.

"It's also the last oil major left in New Zealand."

A petition of 30,000 signatures was delivered to the company demanding an immediate stop on oil exploration and drilling.

Rosemary Penwarden, who had her sign ripped down by security, had travelled from Dunedin to be at the protest.

"Off the coast of Dunedin in the Great South Basin is where OMV want to drill for oil and gas and that is one of the most treacherous oceans in the world and it is where the Southern Right Whales are coming back to... we've got yellow-eyed penguins that are really struggling this year... one third of the world's albatross come from the southern ocean, they breed there.

"So I'm doing this for them, and the thousand of people down south who do not want OMV to come to the Great South Basin."

A Wellington resident, Kieran Martin, who was there to protest said the climate crisis was different from New Zealand's nuclear-free moment, because people did not want to let go of fossil fuels.

He said it was easy to agree on turning down nuclear energy, because New Zealand did not use it.

"Oil is a hard thing to let go of, we use it so much for everything/ So we talk about [climate change] being the 'nuclear-free moment' but nuclear was pretty easy to say no to because of Hiroshima, but, we all use oil and it is so destructive to even be looking for more oil."