A couple fighting their immigration case are living thousands of kilometres apart - despite their relationship never being assessed to see whether it is genuine. 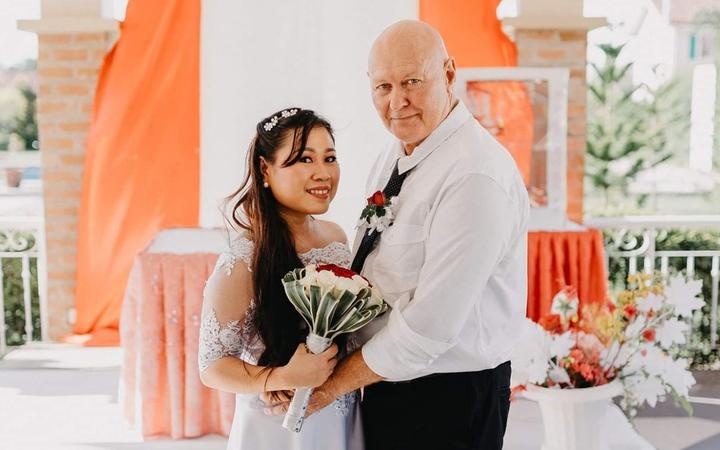 She cannot get a partnership visa - although an appeals tribunal found "compelling evidence in support of the couple's claim to have entered into their partnership for genuine reasons, with the intention that it be maintained on a long-term and exclusive basis."

Work and Income continues to treat them as a couple after they lived together in Auckland for three years.

Mr Greenwood said his superannuation was still being docked to take account of him being in a relatonship, and to claim the single allowance he would have to renounce his wife.

They fear their age gap - she is 34 and he is 68 - and an Immigration New Zealand reference to them not being a 'cultural match' are behind them being declined.

Mr Greenwood had sponsored two other partnership visas when he was younger, meaning they had to go to the immigration and protection tribunal to have their application considered.

It ruled there were 'special circumstances' and referred their case to the then associate minister Kris Faafoi, but he turned them down.

Mr Greenwood, who runs a business in Auckland, chairs a Māori land trust and has four grown-up children, said he and his wife were extremely upset.

"The associate minister could have imposed conditions on Liza's visa which included assessing our relationship but that was not even done, so no-one has looked at whether our relationship is genuine," he said.

"But both the IPT [Immigration and Protection Tribunal] and Work and Income accept our relationship. They won't reinstate my full superannuation even though Liza isn't living with me.

"They wanted me to sign a declaration saying we had finished our relationship before they would reinstate it - I refused.

"Liza and I are heart-broken not being able to be together. With me coming back to New Zealand four days after getting married, it has left us both feeling empty and extremely upset."

Ms Diamos, who has a pharmaceutical degree, said it was not feasible for her husband to move to live with her.

"I live on the Island of Mindanao which has unfortunately militancy and ISIS, some areas are very unsafe, there are security issues across the entire Island, this past month six people have been shot dead," Ms Diamos said.

"We continued our relationship because we truly love each other and want to spend the rest of our lives together, this has been very difficult and has affected me emotionally with on-going stress of our predicament.

"Despite Wayne being much older we are a normal couple who just want to be with each other and are very suited in our match, married for the right reasons and only after getting to know each other properly for three years."

The couple's lawyer Jack Tam said they had asked for ministerial intervention from the new associate immigration minister Poto Williams.

Immigration New Zealand referred inquiries to her office, which said the minister does not comment on individual cases.

The Ministry of Social Development said it appreciated the complexity of Mr Greenwood and Ms Diamos' particular situation and remained committed to providing them with all available support under the Social Security Act legislation.

"We make a decision as to whether someone is in a relationship for the purposes of their NZ Super, or any other benefit, based on a range of information we ask them to provide us," its group general manager of client service delivery Kay Read said.

"It's not always straightforward and doesn't necessarily align with what other organisations consider as being in a relationship, as we're often governed by different legislation.

"Wayne and Liza are married - however, Liza is not an NZ permanent resident, so they're not eligible for the married rate of NZ Super.

"They are in a relationship, so Wayne is not eligible for the single living alone rate of NZ Super."