A 91-year-old man who has depended - in life and love - on the Manawatū Gorge road for 70 years has today delivered to Parliament his hand-collected petition to save it. 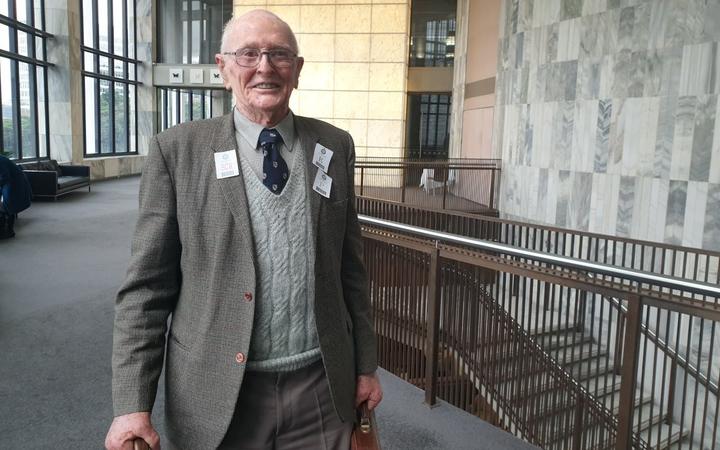 Noni Sandilands, 91, hand-collected 863 signatures for his petition to save the Manawatū Gorge road, and delivered it to Parliament today. Photo: RNZ / Charlotte Cook

The gorge, which had been one of the main routes between the west and east coast of the lower North Island for the last 145 years, has been closed since 2017 after multiple slips blocked the road.

Noni Sandilands, 91, said he had travelled the road since he was young, and it had been a big part of his life.

Without this road his love story would be very different, he said, as he had travelled it to Paihatua while "courting" his wife.

"We are lucky enough this year to get a letter from the Queen, we have been married 70 years. It's an honour," Mr Sandilands said.

"It really is a special road."

Before that, his father used to travel it by horse and cart.

"There was no passing lane, so they'd have to back the horses back so they could pass the next people," he said.

Dressed in his best - featuring his Whanganui Collegiate Old Boys tie - Mr Sandilands woke at 5am today to journey from Colyton to the capital with an 863-signature petition.

Because he did not have a computer, Mr Sandilands collected the signatures by hand.

"Had I had a computer and got email, I think everybody who drives a car or a truck would have signed for the gorge to be opened," he said.

Collecting the signatures face to face meant he was hearing directly from the community, he said, who were frustrated with the noise and traffic hurtling through the Pahiatua track and Saddle Road.

In Ashhurst alone, there were more than 5000 cars and trucks driving through per day.

Members of Parliament were impressed by the efforts of the 91-year-old's dedication and passion for the road, but Mr Sandilands said age "is just a number, some people are old at 60, I am not old yet".

His main goal was to get the Transport Agency (NZTA) to open the Gorge to light vehicles while the alternative road was being built.

The agency is planning to build a new road by 2024, which will run north of the gorge, close to the old Saddle Road, and Mr Sandilands said he thought they would not fix the gorge road because it could jeopardise funding the new road.

NZTA has established a project team to assess the future of the old road and said it was working closely with iwi, councils and the Department of Conservation to develop a plan for the area.

It said the gorge was still highly unstable, however, and the road was not safe for people.