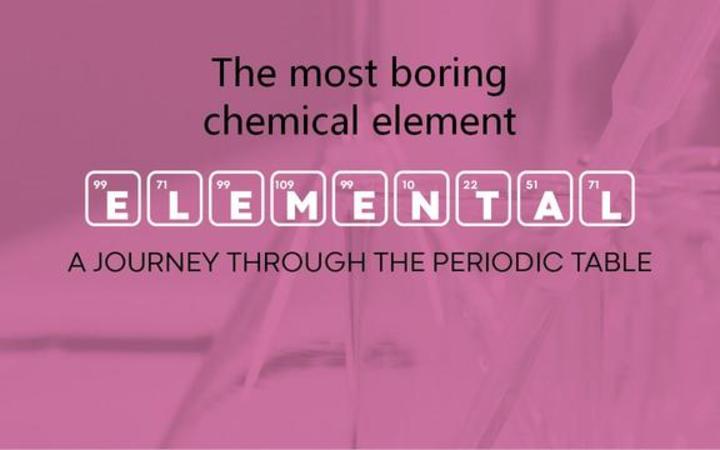 Prof Blackman says his research for the RNZ Elemental podcast got him thinking about all the chemical elements, and what was interesting about them, which made him wonder if there was such a thing as a boring element.

He says he was delighted that the paper was accepted by Nature Chemistry.

"Scientists pretty much live or die by what we publish, so we want to be published where it matters, in a high impact journal, where lots of people will see the publication," says Prof Blackman.

Prof Blackman said the journal commented to him that while the paper wasn't their usual fare, they found it intriguing and thought-provoking.

The editor of Nature Chemistry tweeted that the paper was a pleasure to edit and read.

Currently on leave, but can’t resist tweeting about ‘The most boring chemical element’ by @Prof_Al_ & @rebjel202 - a pleasure to edit (and read) this piece! https://t.co/E3m0bg3YU0 #IYPT2019

Prof Blackman said he "didn't expect people to agree with us necessarily. Obviously, everyone is going to have their own opinions".

So what did Dr Jelley and Prof Blackman decide was the most boring chemical element?

Well, as the paper's brief abstract says: 'Could it be boron or bohrium that is the most boring? You'll have to read to the end to find out.'

'The most boring chemical element' is free to read online and appears in the August 2019 edition of Nature Chemistry. It also features in a bonus episode of the RNZ Elemental podcast, which has been running since February. In short episodes it tells the stories of the chemicals in the periodic table 150 years after it was first published by Russian chemist Dimitri Mendeleev.

The United Nations declared 2019 the "International Year of the Periodic Table of Chemical Elements (IYPT2019)" and described Mendeleev's discovery as "one of the most significant achievements in science".