Protesters are calling for climate change to be considered in a resource consent hearing in Dunedin. 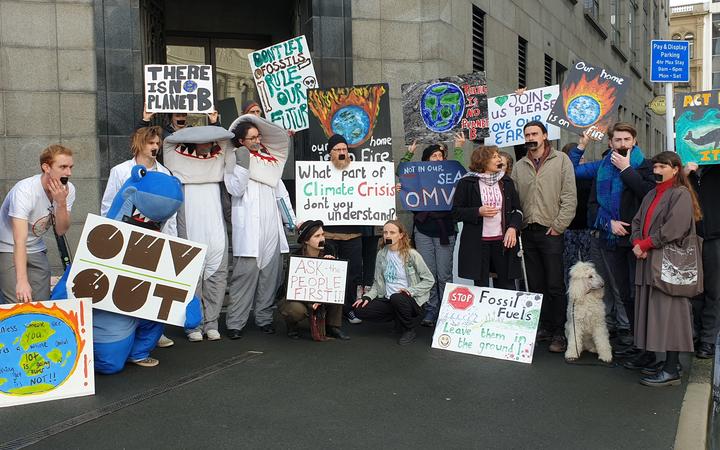 Oil company OMV has sought consent to discharge trace amounts of harmful substances into the ocean while drilling in the Great South Basin.

In the consent, OMV said the discharge - estimated to be up to a cup - would only occur if there was a deck spill.

Protesters dressed up as sharks and taped their mouths this morning, saying the Resource Management Act, and Exclusive Economic Zone and Continental Shelf (Environment Effects) Act 2012 should not prevent climate change from being discussed in the consent application.

Oil Free Otago spokesperson Adam Currie said the effects of climate change were already being felt by some so it should be part of the discussion.

"It's 2019 and we're having a hearing to consider the impact of a cup of waste, but not the impact of drilling for fossil fuels on the climate, our environment, the species living in it, and the future of humanity," he said.

"We can't even afford to burn half of existing oil reserves to avoid catastrophic climate change. Searching for more is madness.

"Not only are they at risk from fossil fuels leaking into their environment, but also from the impacts of the climate emergency as their world warms up." 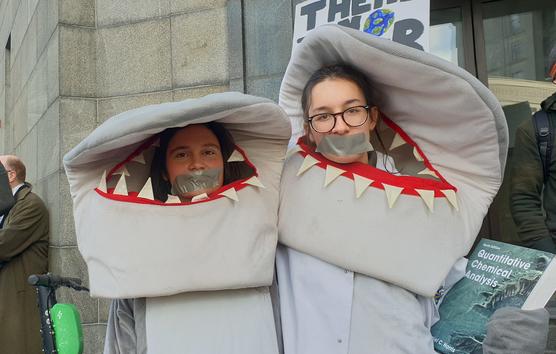 A spokesperson for Environment Minister David Parker said climate change effects were excluded from consideration by both of the Acts when deciding consent applications.

"These effects are dealt with through the Emissions Trading Scheme and under the Climate Change Response Act."

But the spokesperson said that could change during an overhaul of the RMA.

As climate change was ruled out from consideration, Mr Currie said submitters focused on ocean acidification and other environmental impacts beyond climate change.

In a statement in response, an OMV spokesperson said tackling climate change required solutions, which the company was working on.

"Using natural gas is part of the solution for decades to come, as stated in the Interim Climate Change Commission report Accelerated Electrification Report.

"Safety and protecting the environment are OMV's top priorities. The exploration program follows more than a decade of survey work, scientific study and environmental research, and OMV intends to honour its permit commitments to continue to supply the energy the country needs."

A condition of OMV's permit in the basin means the oil company has to drill one exploration well before 10 July, 2021.