An external review of the Hutt District Health Board in Wellington says midwifery staffing levels should be increased significantly. 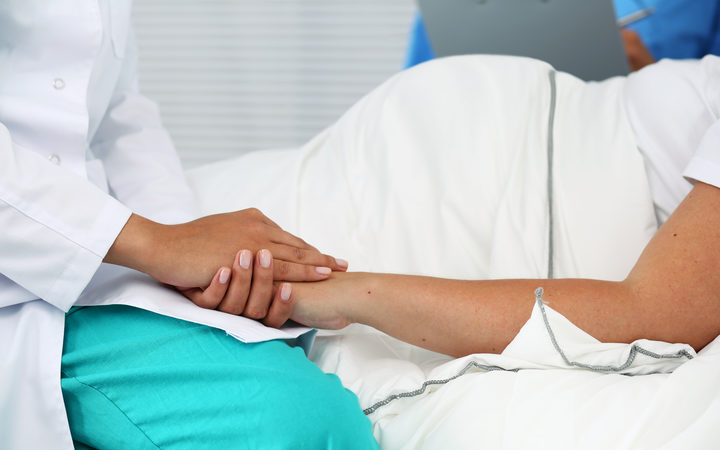 The report says the maternity service "has been plagued by a chronic workforce deficiency". Photo: 123RF

The review report, produced by medical and midwifery experts from other DHBs, is dated last November but was released by the Hutt Valley DHB today.

This followed a preview for DHB staff last night and follows an Official Information Act request from RNZ News.

The 50-page report says maternity services staff are committed and dedicated but the service "has been plagued by a chronic workforce deficiency". It notes that the maternity service had been identified within the DHB and to its leadership as "a major concern for safety".

The report adds that full-time midwifery staffing at Hutt is the lowest in the central region of the North Island - including Wellington's Capital and Coast DHB, Hutt Valley, Mid Central in Palmerston North and Hawke's Bay. It was also well below comparative hospital maternity services care in places that included Northland.

It adds "there is a frequent requirement to work extra hours or shifts to support colleagues which has led to fatigue and burnout and this affects the ability to identify and manage clinical risk." As well, lack of staff had resulted in 'care rationing' and the midwives had become task orientated, which had led to significant dissatisfaction with the job "and feelings of disempowerment and negativity".

The report recommended DHB midwifery staffing levels be increased significantly - a likely increase of at lest four full-time equivalents. Morale was also poor with a belief that "nothing will change". Facilities were also poor.

The report also says there is a high rate of maternal admissions to intensive care, with 12 cases last year. The review recommends an audit is carried out of all mothers admitted to the intensive care unit.

There is also a high rate of caesarian section births at the DHB, at 41 percent. The report says a recent study published last year found a "direct correlation between staff shortages and a high CS rate".

The report adds there has been less engagement by senior doctors in quality and safety activities for several years "due to the priority of covering acute work".

On community-based lead maternity carers, or LMC midwives, the report says that of the pool of 32 LMCs, nine have left the job within the past two years. The report says an average LMC caseload is 50 to 70 women a year. It adds: "If each of the 9 departed LMCs had even a modest caseload the impact is that around 450 women of the 1900 per annum are now without an LMC midwife. If the LMC numbers do not increase, and there is no indication that it will in the short-to-medium term, then the DHB community midwifery team would require a significant increase in staffing of at least 4 full-time equivalent staff."

The report adds that the LMC shortfall has put pressure on remaining LMCs to carry a higher caseload, but they are not obliged to increase their numbers and "it was notable that over the holiday period in December and January that LMC caseloads did not increase."

The Hutt Valley DHB said it accepted the findings of the review and was implementing many of its recommendations. It's also set up a steering group of staff and community leaders to help with the implementation.

The DHB also apologised for a delay in releasing the review.

The College of Midwives said the situation facing the Hutt Valley DHB was not unique. College chief executive Alison Edy said: "There are pockets of shortages in various areas in either the community or in the hospital, certainly Dunedin I understand has a shortage of community midwives at the moment, Counties Manukau, Auckland DHB also. I think those DHBs are also struggling with adequate midwifery workforce."

She added that was not because the country lacked midwives, as latest annual data from the Midwifery Council showed there were 3309 midwives with practising certificates - the largest number ever. Ms Eddy said some midwives were choosing not to work or to reduce their hours or the number of women they looked after. She said that was in response to "the difficult environments they find themselves working in".

"The staffing levels are inadequate, the acuity and needs of the women seeking the service has been increasing for a number of time, and the base staffing within hospitals, of which this [Hutt] is a good example, have not been reviewed sufficiently," she said. She added the report said the base staffing level for the maternity service at Hutt had not been reviewed for at least a decade.

Health Minister David Clark said the midwifery workforce had been stretched across New Zealand "for a long time".

"Everyone accepts that that's not going to be fixed in one or two Budgets but we are investing in that area and I'm confident that the Ministry of Health is across these issues," he said.