Three people have been arrested at a police cordon barring anyone from entering the land at Ihumātao, near Auckland Airport. 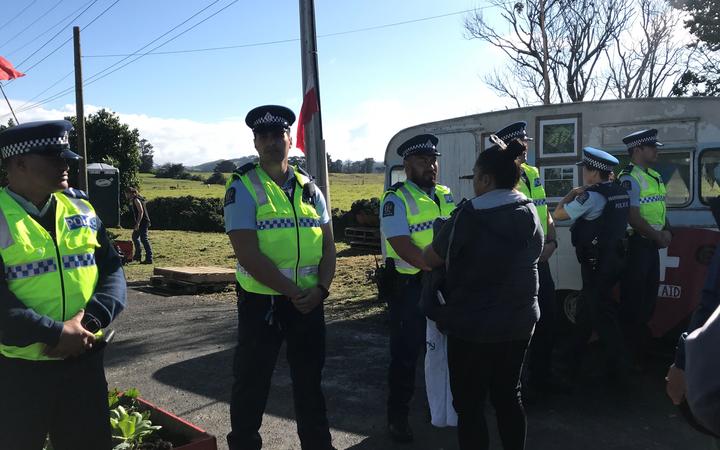 Police at Ihumātao to serve an eviction notice by a bailiff against people who have been occupying the site. Photo: RNZ / Eden More

The site is due to be developed by Fletcher Building but has been the subject of a bitter dispute and occupation, and an eviction notice was served against occupiers today.

Two people were evicted this morning, and there has been a heavy police presence there all day.

The arrests were made for obstructing police, who will remain at the site until the situation has been resolved.

A group has been occupying the land, near Auckland Airport, in an effort to stop the development going ahead.

Kaumātua and Maori wardens were encouraging the unlawful occupants to leave the site.

Two occupants who were inside the site had left peacefully, she said.

"Police have been aware of the situation at Ihumātao and we have been involved in ongoing negotiations with all parties involved for an extended period of time, with the aim of reaching a peaceful mediated outcome," Ms Rogers said.

Green Party co-leader Marama Davidson came out in support of the occupants this afternoon. She said they were on the right side of history and her heart went out to them.

"I wanted the government to come to a better solution and negotiate directly with mana whenua, so I'm really sad that it has come to this, which is a continuation of unjust land confiscation," she said.

She also wrote on Facebook that today's actions by police were a modern form of colonisation. "Land disputes like this will never go away until we recognise mana whenua of Māori over ancestral lands," she posted.