Over 2000 prohibited firearms were handed in to the police over the weekend at government gun buyback events. 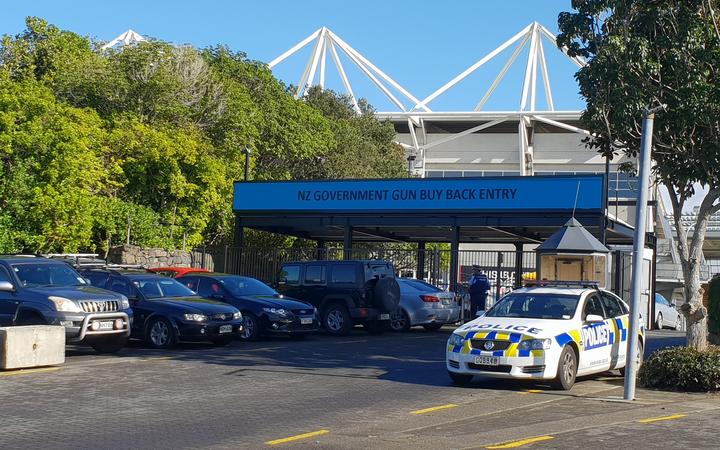 Tāmaki Makaurau - including Waitematā, Auckland City and Counties Manukau - had its first collections on Sunday.

It had the biggest number among all the cities, with 240 firearms owners handing in 405 prohibited firearms and 1343 parts and accessories.

Wellington collected 333 prohibited firearms and 909 parts and accessories from 208 owners on Saturday and Sunday.

They were part of the 258 collections scheduled across the country until the end of the year.

Other parts of the country also held buyback events at the weekend and a total of 2116 prohibited firearms were handed in to the police.

The Auckland event was held at Mount Smart Stadium.

Auckland man Farooq Kassibawi, who came with a Russian shotgun, was one of them.

"I've lost a friend in the events in Christchurch and I don't see the reason why we should be allowed guns like this.

"This only works if everybody abides by the rules, so I'd really like to urge all gun owners to abide by the rules so we can keep New Zealand safe."

"We're really pleased with that [turnout]. I just want to impress on the public that there are many more events cross Auckland through until December 20. Those dates are available online.

"I ask people to register before they come so that will make a faster experience as well."

At the Trentham Racecourse in Wellington Xuan Wang said it was shame he had to give up on his semi-automatic rifle.

Inspector Chris Bensemann, who was overseeing the event in Wellington, said he had come across a man who handed in a 120-year-old gun passed on from his grandfather.

"I certainly saw some people who are disappointed to hand in some of their firearms which they treasured, but when they left after having been through the process, they felt they were treated fairly, professionally and well-compensated."

The government has banned most semi-automatic firearms, some pump action shotguns, and also certain large capacity magazines earlier this year.

An amnesty is in place until late December, and people are urged to hand in their firearms before then.

Police said 2143 people handed in 3275 firearms, and 7827 parts and accessories since the first collection event in Christchurch a week ago.