Age is no barrier for Geoff Tisch, who at 80 is the oldest Walking School Bus volunteer in Auckland.

Every Monday morning, a group of kids wait with their parents at the first walking school bus-stop for Geoff and another volunteer to walk them to Birkenhead Primary, on the North Shore.

He also walks them home on Tuesday, with his wife Linda. Mr Tisch has been doing this for 10 years and says it keeps him connected with the younger generation.

"I really love growing up with the children and seeing them change and getting to know my neigbourhood. These are my people, little people," he said.

Walking School Bus drivers wear bright yellow vests and clip children's paper bus tickets each time they walk to school. It's just like a normal bus, except children walk along a designated route under the supervision of adult volunteers.

Most volunteers are parents, but Mr Tisch started out as a grandparent a decade ago and stayed on when his grandchildren moved away two years ago.

"It's nice to be acknowledged and recognised that you're a valuable part of the community. You can't do all the things you used to be able to do physically but one thing you can do is carry stability and a presence and expression of love for people," Mr Tisch said. 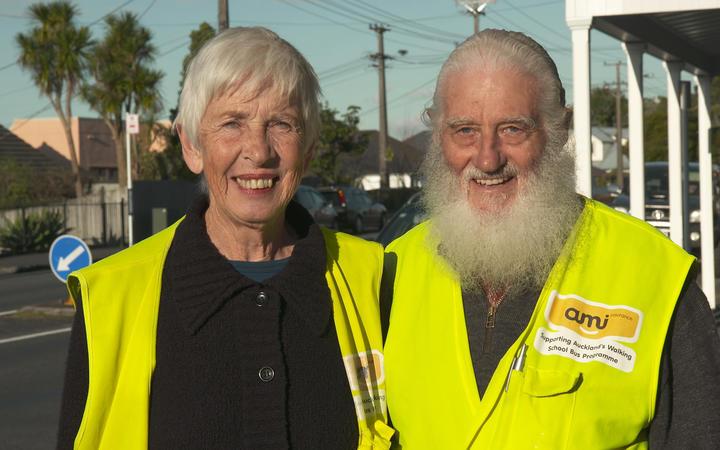 He said many older people can find children quite intimidating, but he soon found his stride.

"I thought children should march to school all in line and it wasn't like that at all, so that can be quite intimidating. I think older people do find younger people intimidating but the more you're with them, the more you realise that there's an amazing intelligence at work, and creativity and lust for life that sometimes us older people forget."

In Auckland, there are 380 Walking School Buses - they're overseen by Auckland Transport and organised by more than 1500 parents and volunteers.

Birkenhead Primary has four Walking School Buses, including the Hinemoa Hikers - which Geoff and his wife Linda volunteer for.

He meets the first walkers at the start and they walk just over a kilometre to school, picking up more kids along the way. There are almost 20 kids on the bus, and two adult drivers.

Parent Katrina King organises Birkenhead Primary School's walking school buses, and said it's great that Geoff remained a volunteer with the walking school bus when his grandchildren moved on, and the kids love having him in their community.

Ms King would like to see more people get involved in school communities.

"There should be more opportunities in schools for retired people, older people in the community, to get involved and not just with walking school buses but potentially reading programmes, because they've got so much to give and it's fantastic they can be involved." 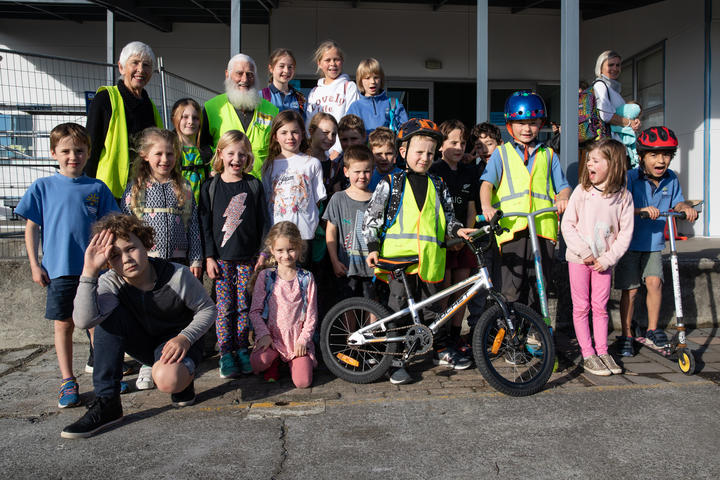 Birkenhead Primary has four Walking School Buses, including the Hinemoa Hikers - which Geoff and his wife Linda volunteer for. Photo: Photo / RNZ

Auckland Transport promotes Walking School Buses as a means to reduce the number of cars on the road, and provide exercise for children in a fun and social way.

Its community transport manager, Claire Dixon, said although they don't actively promote bus duties for retirees, it is a good match.

She said the agency is running a pilot for a new Walking School Bus in South Auckland, where the volunteers are not parents but keen hikers from a local group, The Walking Samoans.

The kids on Geoff's Walking School Bus said they appreciate his commitment and kindness.

Evie, 7, said: "He keeps us safe walking and he talks to a lot of children." And Albie, 8, said: "I like that he's stuck with the walking school bus for so long and he hasn't given up. Sometimes we call him Dumbledore because he's got such a white long beard."