Secondary teachers have voted to accept the government's latest offer after a dispute over pay and conditions. 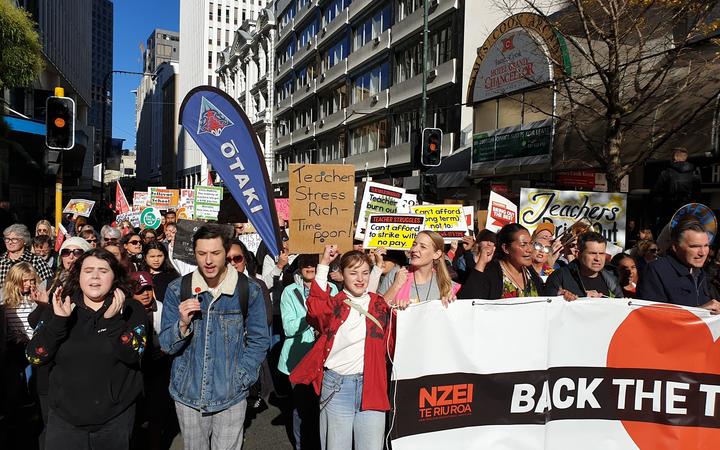 PPTA union members were set to go on rolling strikes earlier this month, affecting one year group each week. They conducted one strike for Year 9 students but then the union called off further action because progress had been made in talks with the government.

The Post Primary Teachers' Association held meetings around the country this week to discuss the offer, after the union said it would recommend that their members accept the new deal.

In the end, 65 percent of members voted to ratify the deal.

PPTA president Jack Boyle said that he had heard concerns that the offer did not address the workload problems and teacher shortages.

"It was, however, a step forward," Mr Boyle said. "They are expecting that [the government] will act quickly to bring significant reductions in workload and an increase in the number of New Zealanders training to become secondary teachers and stem the flow of those leaving because of excessive workloads.

He said this collective agreement would give the government the space to make progress in those areas of concern.

"The accord provides an opportunity to make immediate and sustainable changes that will attract great people into secondary teaching and retain those teachers who are currently struggling with excessive workloads."

Mr Boyle said the union would be working with the government to make that a reality.

Education Minister Chris Hipkins said he welcomed the announcement, adding it was a "constructive move".

"I am looking forward to continuing our work with the teaching profession to progress the education work programme," Mr Hipkins said in a statement.

The main parts of the PPTA offer include:

The deal follows months of negotiations, after area school and wharekura teachers joined with their primary and secondary teachers in strikes last month, and follows primary teachers voting to ratify their settlement earlier this week.

From 1 July, teachers in area schools or wharekura will move onto a unified base salary, giving them pay parity with their primary and secondary colleagues.

Area schools take students from years 1 through to 15, and include rural schools and special character urban schools, such as kura kaupapa.

The Ministry of Education said it welcomed the settlement.

"I'm really pleased our passionate and dedicated area school teachers have secured pay parity and a significant pay increase in this deal - that's really important if we're to attract and retain people," Ms Stuart said in a statement.

"We'll be working hard to address outstanding workload and wellbeing issues through our accord with the government."

The main parts of the offer for area school teachers include: