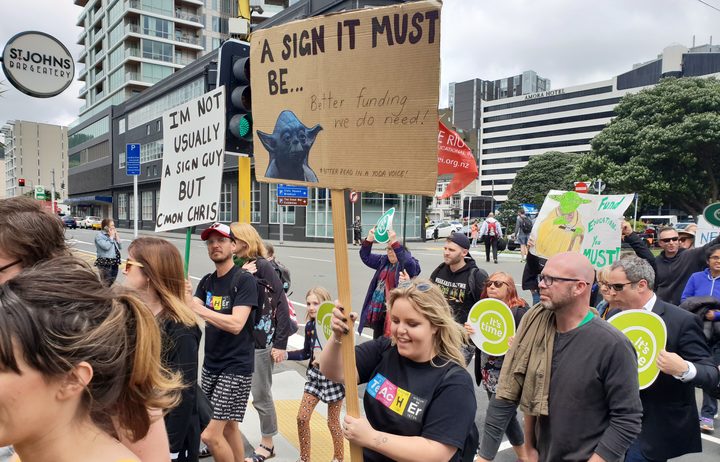 The two teachers' unions - NZEI and the Post Primary Teachers' Association - announced today a "mega-strike" on 29 May.

Primary teachers and principals have voted in secret ballots at meetings across the country over the last week, while the PPTA held an online ballot of secondary school teachers.

The joint strike will be the largest ever industrial action taken in New Zealand, covering almost 50,000 members across the two unions.

Both groups have refused to settle for three pay rises of 3 percent each and their talks with the Education Ministry have been deadlocked for months.

The government has insisted it will not increase the total value of its offers, which it said were more than $1.2 billion over four years. The government is willing to rearrange how the money might be applied to pay rises and staff claims.

"It is hugely disappointing that we have reached this point," Mr Boyle said.

"We want to work with the government to agree solutions that make teaching the attractive career it should be."

Secretary for Education Iona Holsted said the strike action did not offer a solution.

"It will cause disruption to the learning of many thousands of children and young people, as well as causing significant inconvenience for parents and families," Ms Holsted said.

"Those with primary-aged children have already had to manage through two previous strikes."

The Ministry of Education will now apply to the Employment Relations Authority for an urgent return to facilitated bargaining with the primary teachers' union.

It will also seek to start this process for secondary teachers.

Ms Holsted said the ministry was seeking facilitated bargaining because it was the strongest form of assistance available to the parties involved to reach a negotiated settlement.

"Throughout our ongoing pay discussions we have been willing to discuss options for the combined $1.2 billion settlement. We have also invited both unions to talk about how we can address their time and other concerns outside of the pay talks," she said.