The Department of Conservation says the whereabouts of a whale possibly tangled in ropes is still unknown and they'd like to hear from anyone who has seen it. 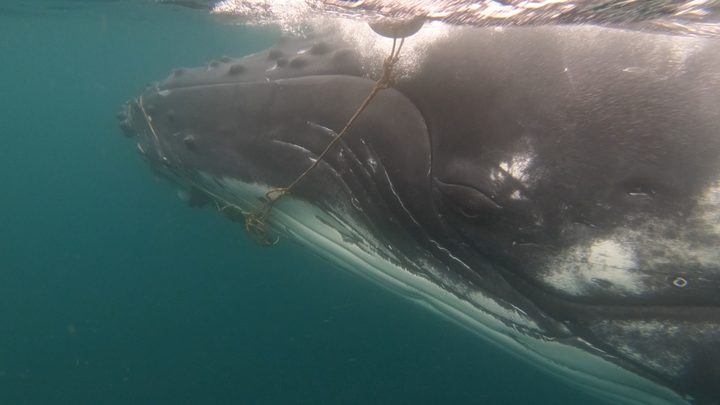 The department's been told of a humpback whale entangled in what's thought to be a craypot line seen off Fiordland on Saturday.

It was reported by a fishing boat crew who saw the whale at Knife and Steel Harbour, between Big River and Waitutu River.

The line appeared to have been wrapped around the whale's pectoral fin and tail stock and was trailing 20 metres to 30 metres behind it. The whale was moving and could travel up the west or east coast of the South Island.

Mike Morrissey, who leads the South Island large whale disentanglement team, said a whale could travel about 100km per day.

"It could either go up to the east coast or the west coast, and sort of the mid-point along that. All we can do is we hope that it's seen by someone else and it can be confirmed that it's the same whale, and then we can work from there."

Mr Morrissey said no damage to the whale's body was reported, and generally a whale could survive being tangled in rope for months, if not years, depending on how tightly the rope was tangled.

In late March a humpback whale entangled in fishing line was reported off the Ōtāgo coast. The whale was then seen off Kaikōura several days later and the whale disentanglement team successfully cut the rope from the whale.

Cutting whales free can take several hours and has to be done when sea conditions are not too rough.

The procedure, called kegging, involves using grapnel hooks to attach rope and floats to material entangling a whale to slow it down and tire it out.

When the whale is sufficiently exhausted, the team edge along the rope until they can reach over with a long pole and a range of various knife blades to cut away whatever has entangled the whale.