Auckland's fare free public transport day is being lauded a success with Devonport having "one of its busiest days ever" and a large increase in pedestrians on Queen Street.

Most of Auckland public transport services were free on Sunday. Photo: Supplied/Auckland Transport

"Britomart is bulging with people and AT staff [say] there are four times as many people than normal. Extra ferries on as well and double decker buses very popular," he wrote on Twitter on Sunday.

Urban advocacy group Greater Auckland - backed up by Heart of the City - said a pedestrian counter at 43 Queen Street recorded in the realm of 60 - 65 percent more pedestrians than the same Sunday last year and Sunday the week before.

Our pedestrian count being used to show the increase in people in the city centre yesterday, thanks to @AklTransport's day of free #publictransport ! ️ #DYK anyone can access our real-time pedestrian count data? You can find it on our website here: https://t.co/9hct6mvHWf https://t.co/O5Tk8bX12M

Auckland Transport's Mark Hannan said it was too early for official figures, but they were expected to be "very high".

"Devonport had one of its busiest days ever with Fullers ferries carry[ing] more than 16,000 people to the suburb by 4pm," he said.

Devonport and the inner city weren't the only places that were busier.

"From Transdev feedback - we know that thousands of people who had never used public transport got on board and many made a family day of it, using multiple modes to get around Auckland," Mr Hannan said.

"Our bus operators report that the Northern Express double deckers were busy with lots of families giving it a go.

"Services to specific destinations were the most popular i.e. ferries to Devonport, Hobsonville Point or Half Moon Bay. Trains to the malls were busy and we know that foot traffic in Britomart was at levels normally seen at [8am] on a weekday morning.

"We know that stores like H&M in the city were packed. I went to Sylvia Park on a train and, despite it being six carriages as opposed to the normal three on a Sunday, all seats were full." 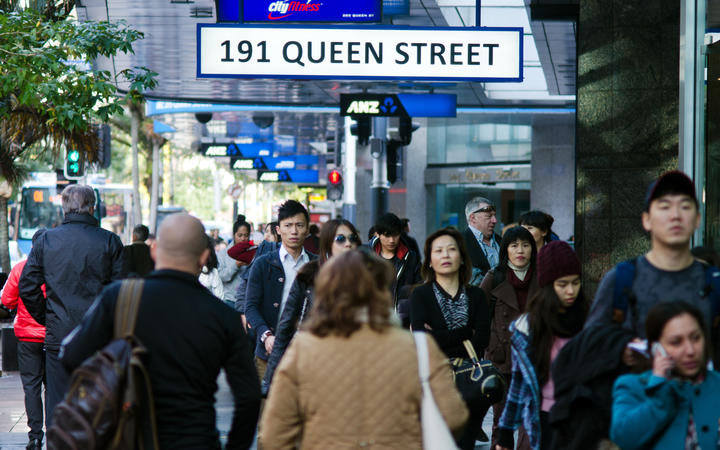 Pedestrian numbers on Queen Street were up about 60 percent on the Sunday before. Photo: 123RF

Greater Auckland's director Matt Lowrie was also out on public transport for a short trip and said it was much busier than usual.

"There were a lot of families out and about exploring Auckland. One case I heard ... in Henderson, a family was asking 'should we get off here and have a look around or should we continue to Swanson' and they decided to go on to Swanson.

"So people were making trips they otherwise wouldn't have and seeing parts of Auckland they wouldn't otherwise have been to."

Mr Lowrie said it was a good example that people were prepared to use public transport if good quality and relatively affordable options were available.

There were a lot of opportunities to get people using public transport and the free day showed there was a need to do more, he said. 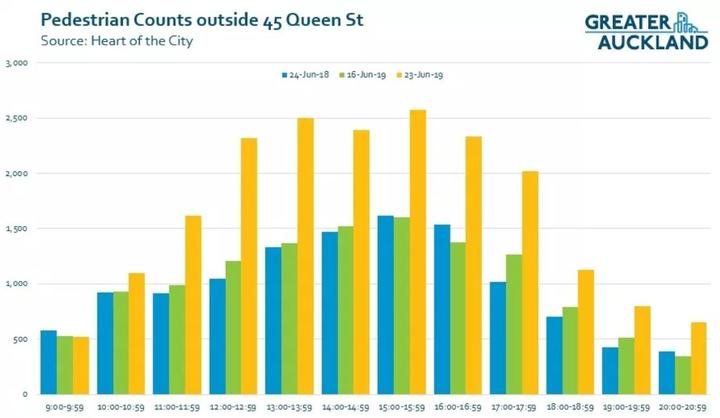 "We've just passed 100 million in trips. Some back-of-the-envelope calculations suggest that even if you could double just the weekend usage and nothing else, we could increase patronage by another 13 million trips ... that's just from making weekends more attractive.

"One of the key points is that one of the problems that we have at the moment is a lot of the resources get put into trying to add more peak services. And so you have to add more buses at the peak time - means you need another another whole bus, you need more drivers.

"Making it easier on weekends and off-peak is relatively cheap because you've got the buses and trains or really don't need to buy any more. You just have to obviously pay people to drive them, but you don't have that physical cost and you don't need any extra infrastructure.

"You can do it with just running a few more services, and so the capacity is there to do it ... so it's a sort of low hanging fruit to get people using public transport."

The fare-free day was held to celebrate 100 million passenger trips on public transport in the past 12 months.

All buses and trains were included, as well as some ferry services.