The rare book collection at Wellington Central Library is set to get a new home at the City Archives building. 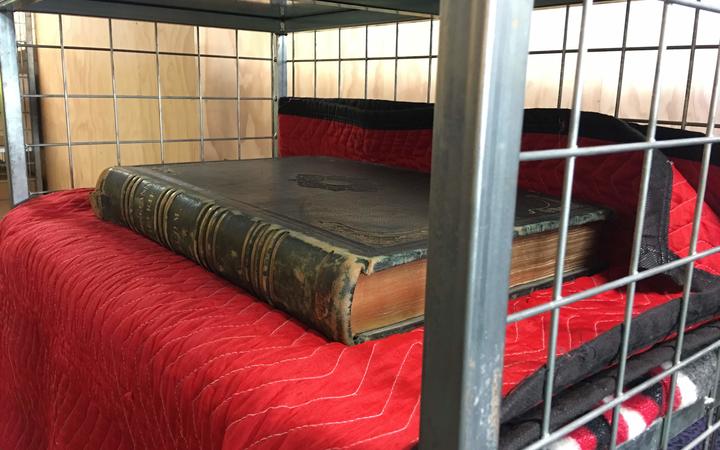 Wellington Central Library’s ‘rare’ collection of items will be moved to Wellington City Archive, after being shut away from the public since March, when an engineer’s report raised concerns about the earthquake safety of the City Library. Photo: Wellington City Council

The 1200 or so items in the collection have been out of public view since March, when an engineer's report raised concerns about the safety of the city library building in the event of a major earthquake.

Since then, the building has been out of action and Wellington City Council has introduced a pop-up library on Manners Street to temper demand.

With only 7500 items currently on the shelves, the remaining 300,000 items have been kept in storage facilities until a permanent solution is found.

Local and New Zealand history specialist Gabor Toth is the main librarian overseeing the move of the rare collection.

Mr Toth said he had not been in a hurry to move these items as it was important to find a "good home" for them.

"Everything has happened so fast and most of our efforts to this point have been in getting the Manners Street branch open, and to be able to build a new library branch in six weeks was a huge effort that involved a lot of people pulling together."

The move will be completed by Monday at which point cataloguing will begin, a process which Mr Toth said would take some time.

"I would like to think within the next four weeks or so all of the material which is in the rare book collection will appear again in the catalogue."

He said access to the collection will be on an appointment basis only.

"People will be able to email us, let us know what they want and they can visit the Wellington City Archives and view the material in their reading room there."

Mr Toth said the rare collection which includes books, photographs and manuscripts, capture elements of both New Zealand and Wellington's past.

"They are our taonga. Some of them are fascinating from a local history perspective, some of them are purely beautiful objects, some are very valuable."

City Archives for Council team leader Adrian Humphris said it had new shelving installed, creating free space which it was happy to give to the library's rare collection.

"It's really nice to work and engage closely with the library and study some of their material, it will also give us a chance to learn about their collection."

Several interesting titles from the collection include a first edition of the first direct translation of the Quran from Arabic to English in 1734, Twelve months in Wellington by John Wood (1843) and bound volumes of the New Zealand Graphic and Ladies Journal, which contained the recently discovered letter and short story by Katherine Mansfield.

Architect calls for Wellington library to be modified not demolished

Architects want a design competition to find creative ways of preserving as much of Wellington's quake-prone central library as possible.

A recent engineering assessment found the three-storey building's precast concrete floors could collapse in a big one.

The council is seeking advice on whether to strengthen or demolish, and the mayor, Justin Lester, said initial advice shows both options are equally costly - but strengthening would be much faster.

A member of the Architectural Centre, Kate Linzey, said the building holds a significant place in the community's memory, so it deserves to be kept.

"It could be adaptively reused or modified, how a different structure could be inserted into the existing envelope of the building or to at least preserve some qualities and aspects of the existing structure."

Ms Linzey said there's an environmental cost to demolition, and new concrete, steel and glass is incredibly energy-intense to produce - so people's ideas on how to keep the building should be sought.