A refugee family of 11 has arrived to live in New Zealand, after two of their family members died in the Christchurch mosque attacks. 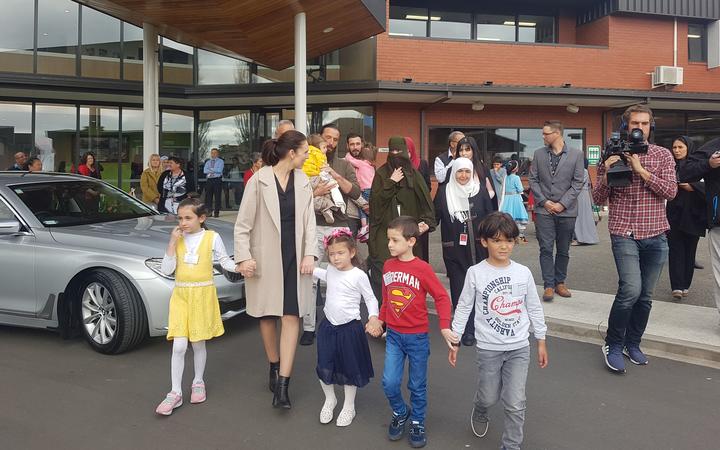 Prime Minister Jacinda Ardern with members of one of the families of the Christchurch attack victims, refugees who are being resettled in New Zealand. Photo: RNZ / Jordan Bond

The family members had been refugees for six years, most recently living in refugee camps in Turkey after fleeing Syria in 2013. Some of their family live in Christchurch. Two were killed on 15 March.

The UN High Commissioner for Refugees (UNHCR) agreed to refer the rest of the family to New Zealand for resettlement, after Immigration approached the agency in an effort to keep the family together.

They arrived last Saturday and will live at the Māngere Refugee Resettlement Centre for six weeks as part of the next intake.

Today - on World Refugee Day - the prime minister planted a pōhutukawa tree with the family in memory of all victims of the mosque attacks with the help of the family's spokesperson, Nadia Stas, and her family.

Ms Stas lost her son-in-law and grandson in the attacks. Her daughter and two other grandchildren are in Christchurch.

She said the response and support New Zealand had given her family had been special.

"I want to thank the New Zealand government and people in general for looking after my daughter and her family, especially because we weren't here in New Zealand. Back overseas, I felt that she already has a family in New Zealand, so I thank you for that," Ms Stas said, through a translator.

She praised the prime minister's response. 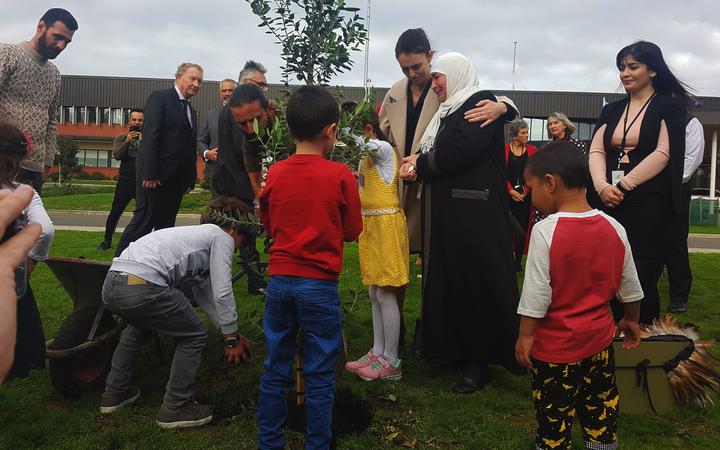 "I felt she's a true human who feels the suffering of any human beings in different places.

"Everybody here cares about the human being. This is the most important thing in the world, that's why it's so special to me."

Immigration's refugee quota manager, Qemajl Murati, said they approached the UNHCR to see if they could help to unify the family.

"UNHCR's response was very positive in a short amount of time, so we initiated the process and it was sped up, and we did our best to have the reunification as quickly as possible.

"There was an exemption. Normally Turkey doesn't fall within our traditional settlement region, but because of the situation, and in agreement and in coordination with the Minister's office and agencies and everybody's support, the UNHCR made an exemption and we have this family. We kind of consider this an emergency situation which enables us to resettle people from any part of the world."

The family will be part of the next intake in July.

This intake of 173 refugees has spent the past six weeks at the centre ahead of permanent resettlement around the country. Today there was a farewell ceremony, where the new New Zealanders receive their residency documents and farewell the centre.

When the prime minister addressed the group with a "kia ora", many loudly responded with a kia ora of their own.

Some spoke about their lives, and some thanked the government for the chance to make a new life here. After each sentence spoken, a hubbub of voices started: interpreters of various languages, relaying the speech to those in the crowd, sat in pre-labelled language sections.

Migabo Mugisho, originally from the Democratic Republic of Congo, spoke.

"We were, for 23 years, living in plastic sheets. Everyone had hope of leaving ... for those opportunities which the New Zealand government has given us to return our hope of life, we thank you so much," he said.

"I would like to appeal to the New Zealand government to remember our friends and brothers who are still in programmes or difficulties in the refugee camps."

Another, a young woman named Amad, left her home country of Somalia early in her life, and had been a refugee in Malaysia for a number of years.

"My new journey has started here in New Zealand. The day I arrived, I realised I am no longer a refugee, but a New Zealander. I am thankful that today I am here, and I have many dreams and missions to accomplish - the first is my education."