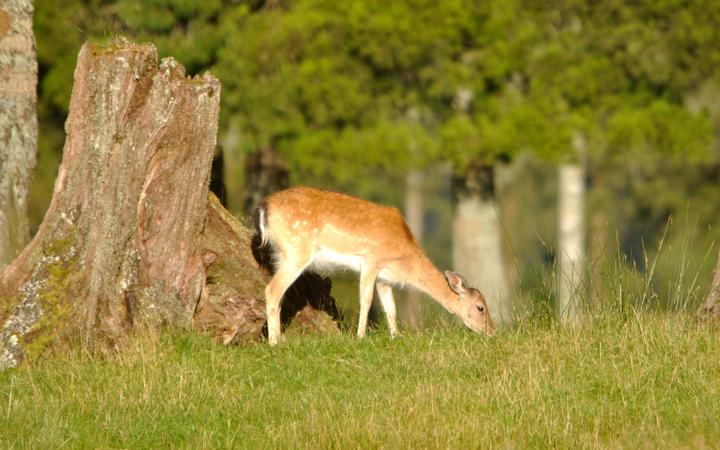 But tensions between them and conservation groups have eased with an agreement to use deer repellent in the poison dropped in the Kahurangi National Park.

Deerstalkers' Association immediate past president Bill O'Leary said deer repellent had been used in the previous two 1080 drops, and the current one under way.

The Department of Conservation (DOC) said 1080 treatment in the rugged park was to combat an expected boom this year in the rat population. Rats are a major threat to birdlife, and efforts to restore the native bird population in the area.

This year's beech mast was expected to lead to a heavy breeding season for rats.

Kahurangi National Park was home to many vulnerable species including kākā, kea, great spotted kiwi, and rock wren, DOC said. All are ground-nesting birds, which are particularly prone to rat and stoat attacks.

It said there were seven species of deer established in the wild in New Zealand. They were the descendants of deer imported in 1851 and then set free.

Fallow deer were introduced from 1860 and were now found in many low-altitude forests, DOC said.

However, hunters argued that culling animals, considered by some to be pests, was important to preserving plants and trees which deer foraged on.

Mr O'Leary said hunters respected moves to protect native birdlife with the use of the poison and trapping, but they did not want to see the deer wiped out.

The herd, which was now a remnant of a larger one, lived on the last bit of public land in Golden Bay where people could hunt.

"It's important for two reasons. It's one of the first herds to be established in New Zealand, and secondly, in the Takaka/Golden Bay area that herd is on one of the few places on public land where people can hunt deer," Mr O'Leary said.

"If that little herd is taken out, and it would take only one or two 1080 drops to do that, there would be no public hunting in the Golden Bay area."

He said the small, fallow deer were essential for regenerating the herd in the area.

The area of northwest Nelson, where the fallow deer herd remained, was once a recreational hunting area before it was gazetted as the Kahurangi National Park, Mr O'Leary said.

"The Nelson and Golden Bay branches of the deerstalkers' in association with the former forest service managed that herd as though it was valued.

"When that area became part of a national park, the recreational hunting status of that area disappeared."

Mr O'Leary said the number of poisoning operations in the area in recent years had led to a decline in the herd.

"Fallow are very small animals, and very susceptible to 1080."

He said they did have the potential to damage native plants, the same as "a tramper walking up the track".

Mr O'Leary told a recent Nelson-Marlborough Conservation Board meeting that hunters managed trap lines in Fiordland and elsewhere, including the Nina Valley, Lake Sumner and Rakaia, and behind Richmond in the region.

However, conservation groups have challenged the Deerstalkers' Association about the conservation work it carried out.

Hunters around the country killed up to 150,000 animals a year, he said. In most cases, they were deer and the alpine species of wild goat, tahr.

Mr O'Leary said it was wrong to compare death of an animal by 1080 as the same as being shot.

"One of the criticisms we face is that hunters are only into it for blood sport, but in many cases hunters hunt as a by-product of just enjoying the outdoors.

"What they're doing is actually of value to conservation."

DOC's predator-control programme, which included the use of 1080 was supported by Forest and Bird, and Federated Farmers.

DOC said aerial 1080 predator control was the only pest control method that could be deployed rapidly enough to manage rat and stoat surges over vast or rugged terrain, to protect at-risk native wildlife.

The 1080 drops began in May and would continue until December this year. Areas where the treatment occurred would be closed to the public and would be well sign-posted.